I received a complimentary Funny or Die game to facilitate my review. The opinions in this post are 100% mine.  You can read my full disclosure policy here. 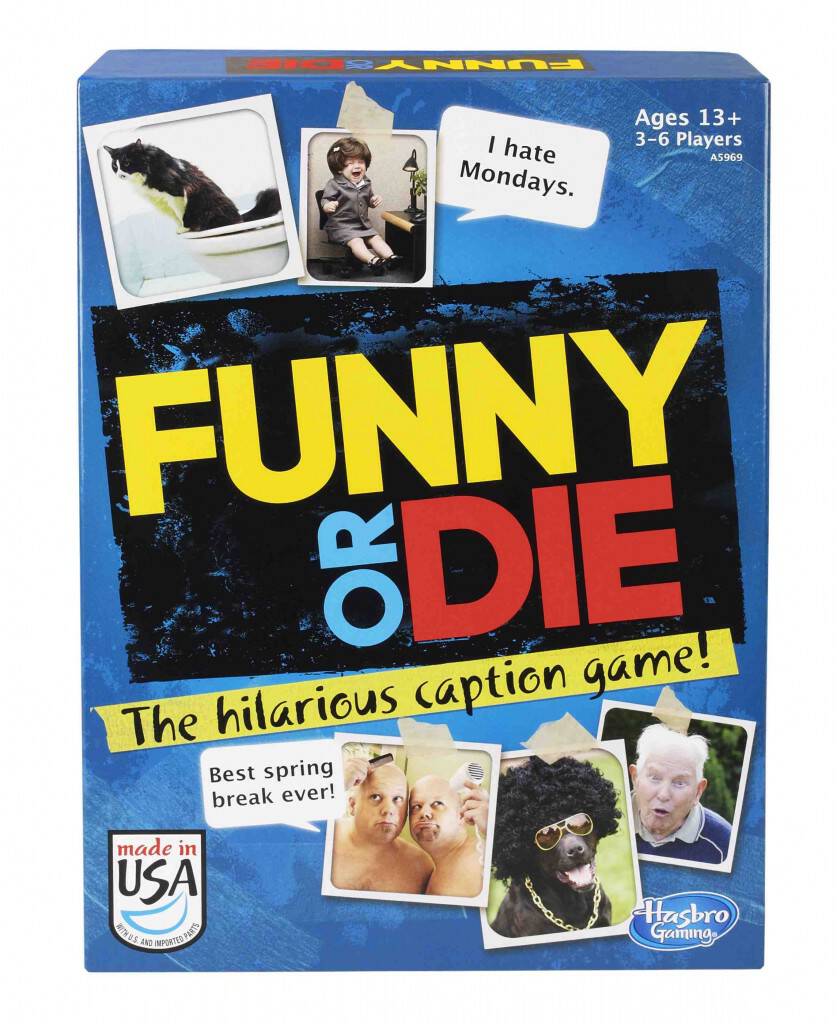 Most of the time when I’m playing a game it’s a kids’ game so I get a thrill out of a game that’s more geared for the older crowd.  Funny or Die is the new Hasbro game that had us totally cracking up!

Hasbro is joining forces with Funny or Die, the popular comedy video website, to bring you the ultimate in caption craziness with the FUNNY OR DIE game. Try to one-up your friends by matching outrageous photos and captions to create the best laugh-out-loud combo. Everybody votes on which is the funniest and which one must “die.” Players earn money for having the funniest pair and the player with the most cast at the end of the game wins. With hundreds of hilarious pictures and captions, the FUNNY OR DIE game will have players laughing till the very end. 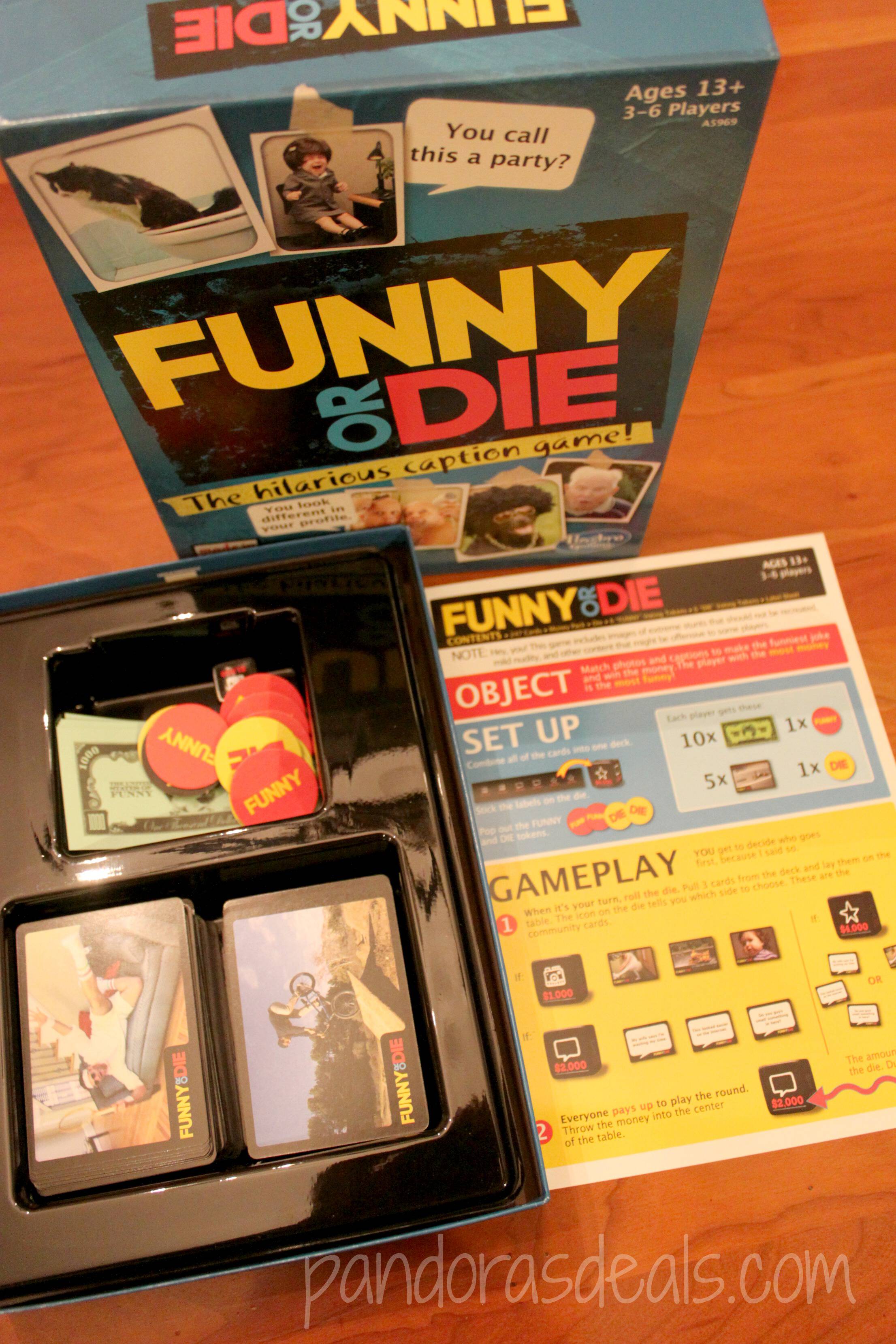 What’s in the box?

You get all the Funny or Die cards (lots of them and they’re hilarious), Funny tokens, Die tokens, a die, and some play money.  He or she with the most money at the end wins!  The directions are really clearly spelled out complete with pictures to make it quick and easy to get started. 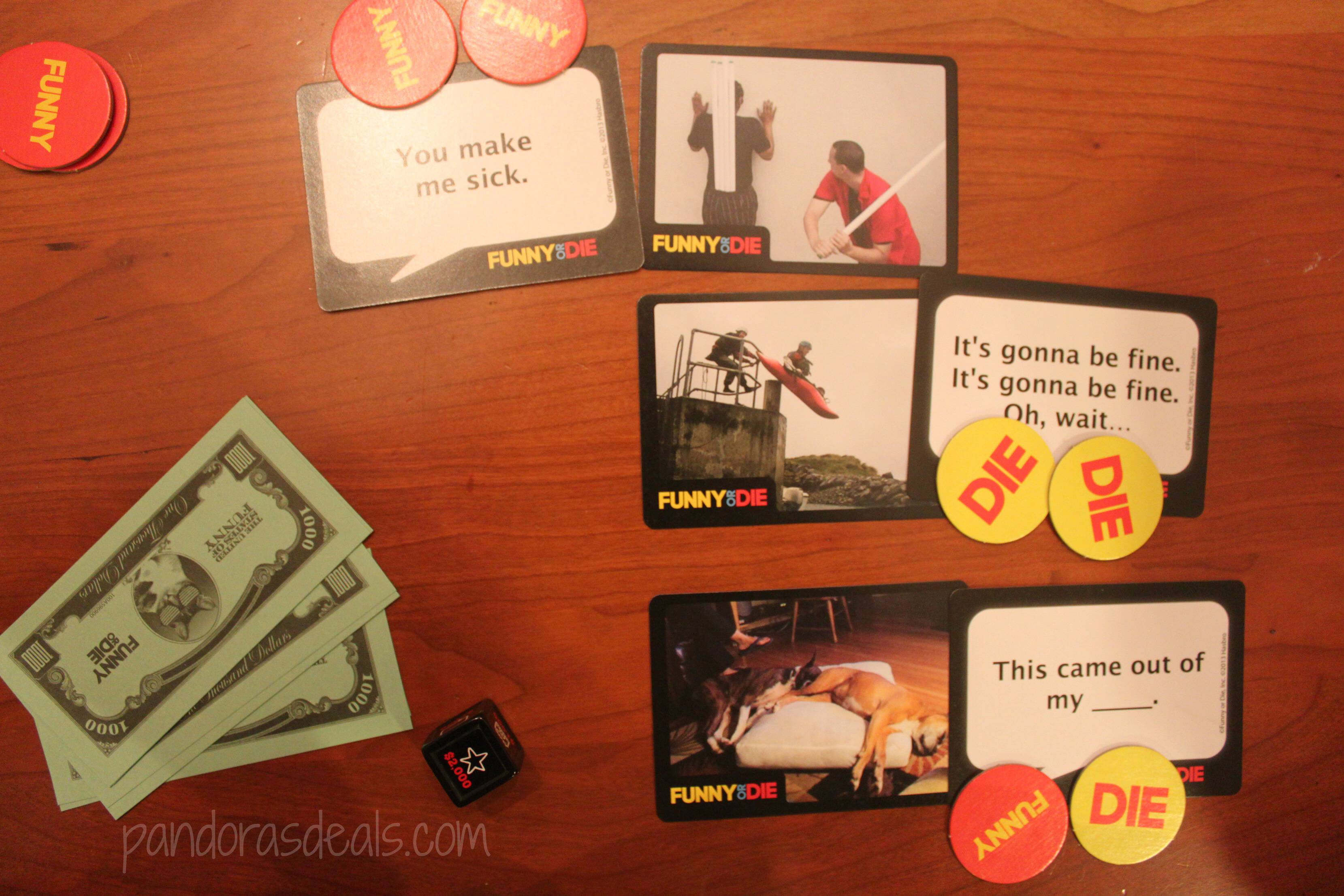 How do you play?

Each player gets some cards and some money and the roll of the die determines how much money is up for grabs on each turn.  With the start of a new turn you flip over 3 cards from the deck, either face up with a picture or a caption. The die determines which you pick.  Then each player has to choose a card in their hand to match with one of the 3 cards in play.  When everyone has played their card, each player then casts a Funny token on the match they find most hilarious, and a Die token on the match they thought fell flat.  One rule: No voting for yourself.  Then the player whose match got the most Funny tokens takes the pot of money.  Rinse, repeat.  This is a picture of one of our plays, but I’m not going to disclose who was playing to protect the sick sense of humor of the innocent.

We had so much fun playing Funny or Die! There were tons of laugh-out-loud moments.  It’s a great party game for adults or older kids.  It’s recommended for ages 13 and up and I think that’s about spot on.  We’ll definitely be breaking this game out when our friends come to visit. It’s hilarious!

Funny or Die is available on Amazon and is a perfect party game for the adults!  Be sure to follow Hasbro Game Night on Facebook and on Twitter to be the first to hear about any new fun games and promotions!

Hasbro is generously offering one of my readers their own Funny or Die game!  This giveaway will end on January 15, 2014. You can enter to win [HERE].