Fallingwater and Kentuck Knob are two gorgeous, unique homes designed by architect Frank Lloyd Wright. They are located in the Laurel Highlands, a southwestern area of Pennsylvania, and absolutely worth a tour when you are in the area. 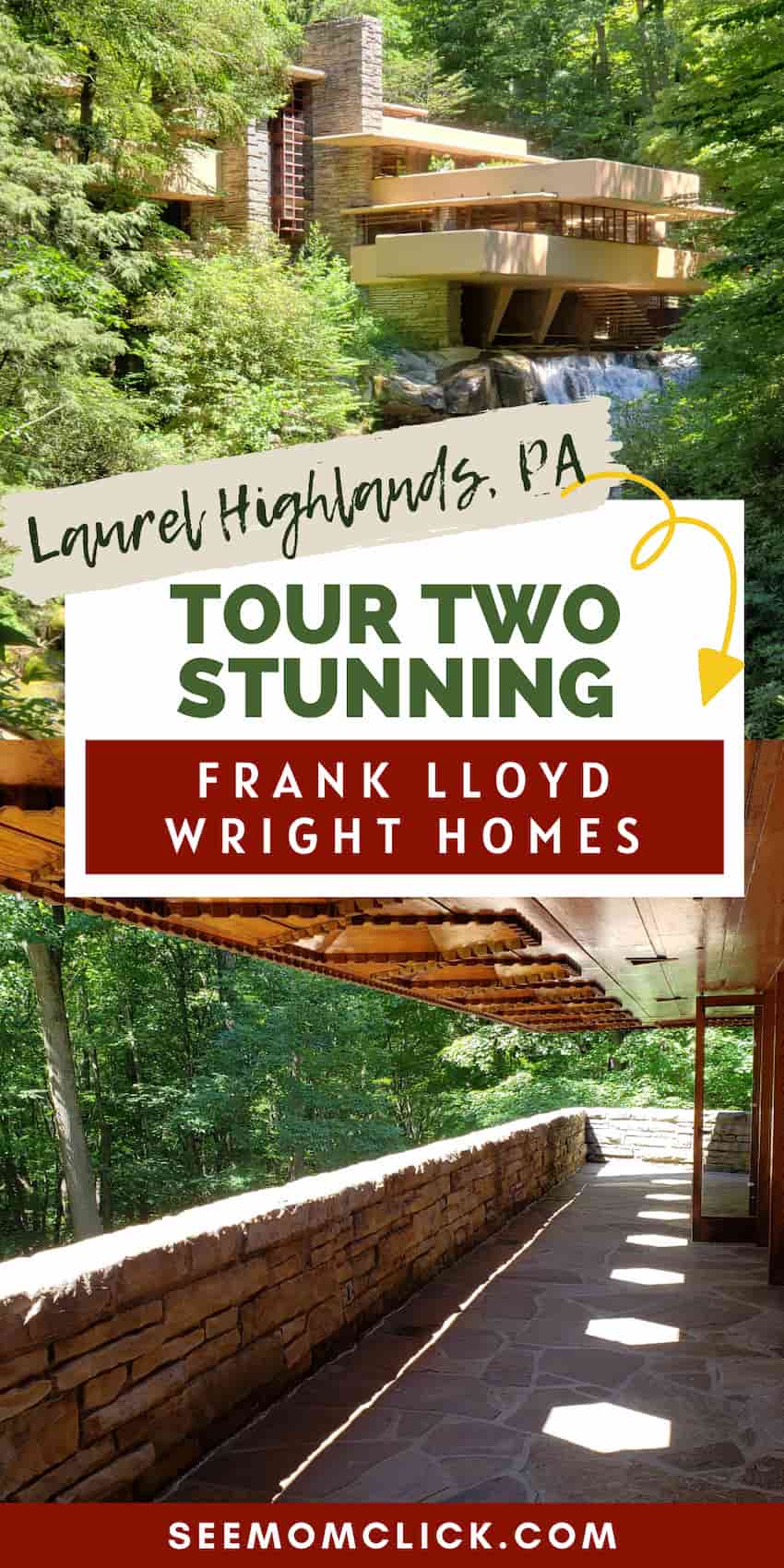 I can appreciated great art and architecture, though I am decidedly not ‘smart’ about it. This is probably true of most people, right? We know what’s beautiful and amazing without having to have a formal education in the matter.

While visiting the Laurel Highlands on a hosted trip, my friends and I were invited to tour two Frank Lloyd Wright homes in this area of southwestern Pennsylvania. I was familiar with Fallingwater and had heard of and seen pictures of it, but Kentuck Knob was new to me. 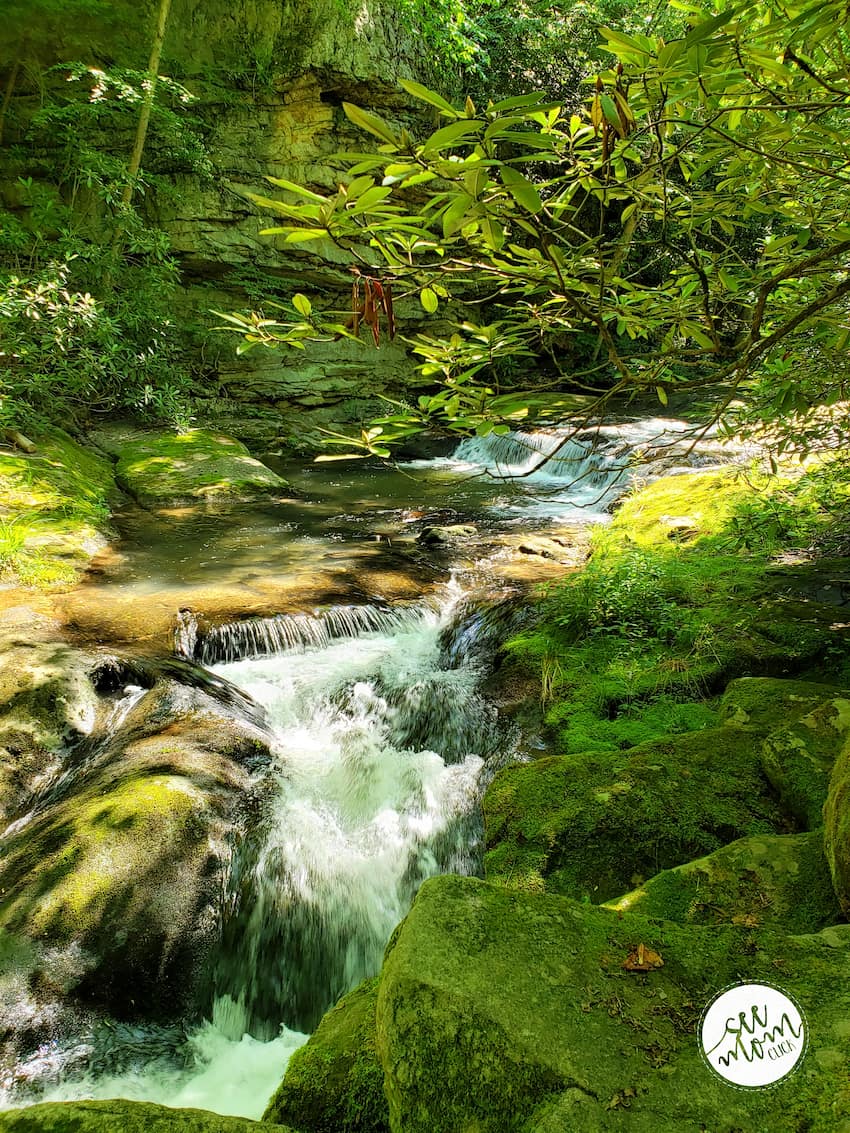 Both homes are absolutely worth a tour, even if you are not well-read in the famous architecture department.

I’ve been in art museums where I have that I-don’t-get-it feeling, but I think absolutely everyone can appreciate the stunning beauty in these homes, probably because real people lived in them, and they have an off-the-charts wow factor.

Fallingwater is one of the most well-known Wright homes, and we were able to tour the grounds and view the home from the outside (which included walking on the patios and decks). If you want an inside tour, plan ahead and get it scheduled online. They fill up quickly. 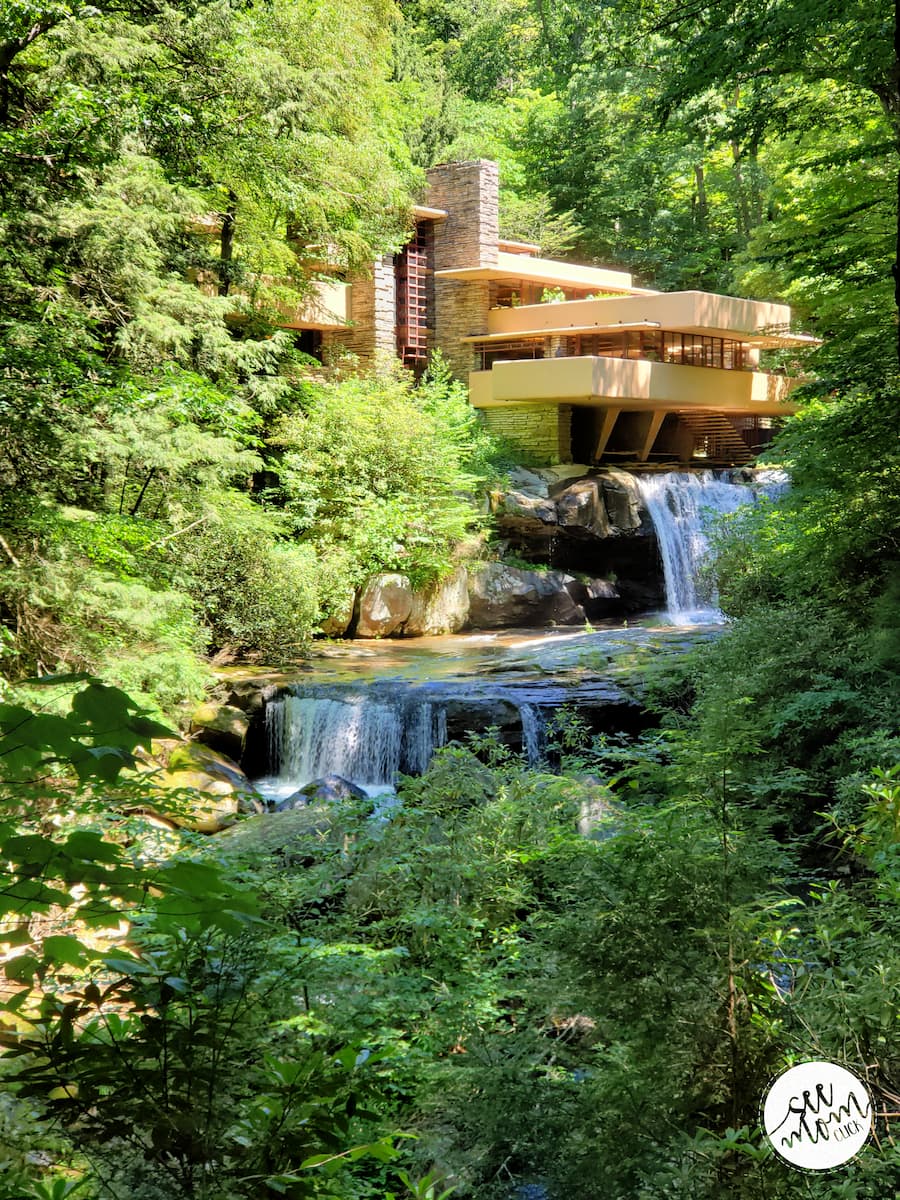 Built in 1935 for the Kaufmann family, owners of Pittsburgh’s largest department store, Fallingwater was primarily used as a vacation home during their lifetimes. It is now operated as a museum, owned by the Western Pennsylvania Conversancy.

American architect Frank Lloyd Wright’s philosophy when it came to architecture, was to marry the indoors and the outdoors, or find ways to showcase a union between art and nature. Many of the materials used both inside and outside are natural, such as native sandstone.

Wright used this concept of compression and release in his design. In the photo above, I’m outside and walking from a pathway behind the home to a terrace out front. It’s a narrow, compressed area, and spills out into an open deck. A person feels the sensation of being compressed, and then released through these tight spaces.

The main house is 5330 square feet, and nearly half of that is made up of outdoor terraces.

It is also famously cantilevered over a waterfall, making this natural element feel like it’s part of the home. If this were my home, I’d never leave. The natural beauty everywhere, inside and out, is so peaceful.

Why Is Fallingwater Famous?

While we were unable to tour the inside of the home, we got several peeks through the windows. The use of stone and earthy colors make it intentionally hard to distinguish the inside from the outside.

There are only two colors use throughout the building: one is a light colored ochre for the concrete, and the other is Wright’s signature Cherokee red for the steel.

This is the pool near that Mrs. Kaufmann liked to swim it (though I’m sure it was less green in her day).  This pool is over 6 feet deep and fed by a natural spring, which feeds into Bear Run stream.

The stone, concrete, and earth tones along with so much greenery make this the most gorgeous escape into nature.

Fallingwater is Frank Lloyd Wrights most acclaimed design, and while I’m sure most of us have seen the picture, seeing it in person is really inspiring.

To get that ‘money shot’ of the home cantilevered over the waterfall, you have to go down a trail and peek through the trees. It is just a magical property. I highly recommend a visit while in the Laurel Highlands.

A second Frank Lloyd Wright home that is in the Laurel Highlands area is Kentuck Knob. This one I had never heard of, and because it’s a little less well-known, it is a little easier to get tickets to tour.

We were able to go inside on a guided tour, and this home is amazing!

This home was build by Wright for the Hagan family in 1956, who commissioned him to build it after they fell in love with Fallingwater. They owned a major dairy company, Hagan’s Ice Cream (now owned by Kemps).

This is what’s called a Usonian home, meaning it is designed for middle-income families.

Kentuck Knob is actually one of the last homes to have been completed by Wright. It’s a one-story home with an open floor plan, and it’s designed on a hexagonal module, so that shape repeats throughout the property.

Built right into the crest of a mountain, the views are beautiful and that feeling of mixing the indoors and outdoors  is very much present here.

We were not permitted to take photos inside the home, but much like Fallingwater, the materials used inside were some of the same used outside. Native sandstone and red cypress are the primary building materials.

The coolest thing about the inside of the house is all of the angles.

In a typical home, rooms have four corners. Kentuck Knob rooms are angled in totally unique ways, with tight spaces opening up into large ones. The bedrooms are every kids’ dream – so many nooks and crannies!

From outside the home, the view of the mountain is just stunning.

My favorite feature of this property is this cantilevered overhang. Notice the hexagonal windows to let the light shine through.

This terrace opens up from the living room (see the doors open on the right side of the photo), and at certain times of day, the angle of the sun projects hexagons of light into the living room. In this photo, you can see them on the stone terrace.

Isn’t this the most unique design? There’s even a lot of detail around the hexagonal cutouts, too. I love this space.

The walk from the house on top of the hill, back down to the parking lot, is through a beautiful sculpture meadow. It includes this slab of the Berlin Wall, and many other really cool pieces.

The Hagans lived at Kentuck Knob for 30 years, and in 1986 Lord Palumbo of London purchased the property for $600,000. He balances his time living there with leaving it vacant for use in public tours. You can book your tour here.

Visit Go Laurel Highlands to learn more about what to do, where to stay, and where to eat in the area! I had one of the best meals of my life at Out of the Fire Cafe in this area, so be sure to go drool over those pics and add a stop to your itinerary.