I happen to have a major sweet tooth. MAJOR.  And I seriously love cheesecake.  Sadly I don’t get to eat it enough so when I discovered Eli’s Cheesecake of Chicago I couldn’t help but to drool over their amazing desserts.

Eli’s Cheesecake makes the most fantastical cheesecakes you can dream up.  Seriously, this isn’t some generic cheesecake.  Some of their flavors include Tira Mi Su, Totally Turtle, and White Chocolate Raspberry.  It really does taste as good as it looks, too! 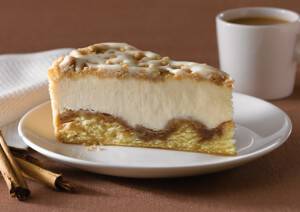 I had the opportunity to try this Cinnamon Roll Streusel Cheesecake. OMGreatestThingEver.  It’s SO good!  First of all, I was totally impressed with how it was packaged.  I wasn’t really sure how you safely ship cheesecake, but the folks at Eli’s really know what they’re doing.  It came in a sturdy cardboard box that was inside of another box, packed with dry ice.  So the cheesecake was frozen when it arrived which kept it perfectly fresh and safe from getting smushed around in the box.  I had to stick it in the fridge to defrost for several hours.  My daughter has inherited my sweet tooth and she’s so impatient!  She made me dig into that cheesecake before it was totally defrosted.  (Can you believe her?  I would have happily waited until the following day to have a taste.  Sheesh.   😉   )

I love how the cheesecake is already sliced up for you.  This saves a knife and some battles over who got the biggest piece.  Plus there’s a piece of paper in between each slice so they come apart easily and without any mess.  It’s super easy to serve, and this is one BIG cheesecake!  It’s 9 inches in diameter and serves 14.  I’ve been munching on this (and sharing, thank you very much) for a while now and still have two pieces left.  I’m going to be so sad to see them gone. And as you can imagine it tastes incredible!  Mmm…the cheesecake is so smooth and sweet, and that cinnamon-y crumble on top is amazing.  The bottom layer is actually cinnamon swirl coffee cake, so it’s like eating cheesecake on top of cake.  Best thing ever.

If you have a special event planned and need a WOW dessert to serve, definitely shop on Eli’s Cheesecake!  First of all, their products are simply divine!  And secondly, they make it so easy to serve a delicious treat without any extra mess or work on your part.  Gotta love that!  Be sure to follow Eli’s Cheesecake on Facebook, Twitter, and Pinterest to be the first to hear about their latest products and promotions.

Eli’s Cheesecake is generously offering one of my readers the same Cinnamon Roll Streusel Cheesecake that I got to review!  YUM!  This giveaway is open to US residents only and will end on December 24, 2012.  You can enter to win [HERE].

I was provided with a complimentary  Eli’s Cheesecake to facilitate this review.  The opinions in this post are 100% mine.  You can read my full disclosure policy here.