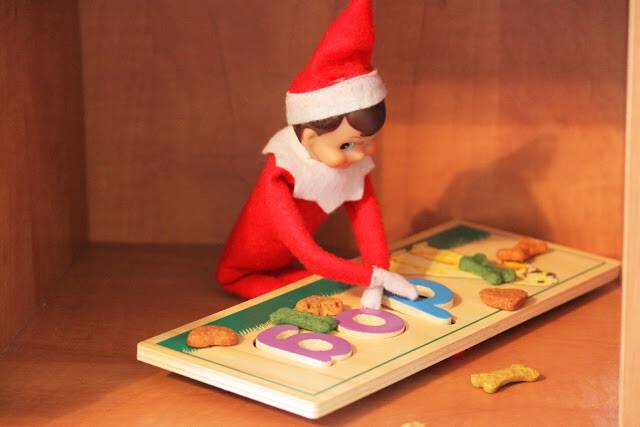 This morning I woke up to the sound of my daughter laughing, followed by her little footsteps over to my side of the bed. “Mommy!  You’re not going to believe where Tootsie is.  It’s HILARIOUS!”  She got out her camera and showed me the picture she just took.  Smart girl, my daughter is, taking a picture rather than trying to drag me out of bed. 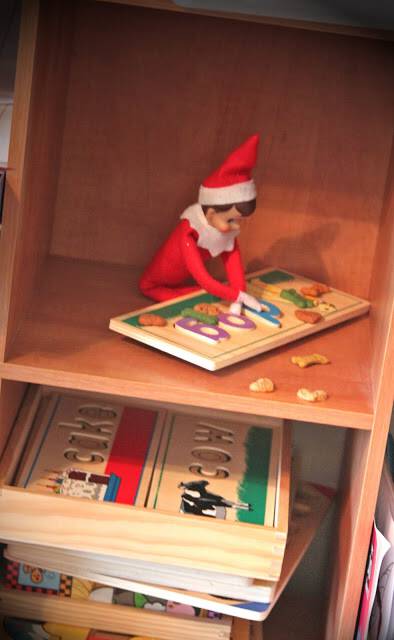 She was right.  I think his latest stunt is hilarious, too. Tootsie flew back from the North Pole and got out some puzzles, spelled the word dog and laid out some treats for our little pup, Sam.  Apparently Sam has been a good little dog.  This is hotly debated, but if Tootsie thinks so, we’ll go with it.

Are you having fun with your Elf this year?  Share your pictures of his or her hiding spots with me on Facebook, or email them to me at pandorasdeals@gmail.com!  I’d love to see your creative ideas and I’ll be sharing mine with you each day, too.
Don’t have an Elf yet?  Get the scoop on the Elf on The Shelf here and find out where you can get your own!