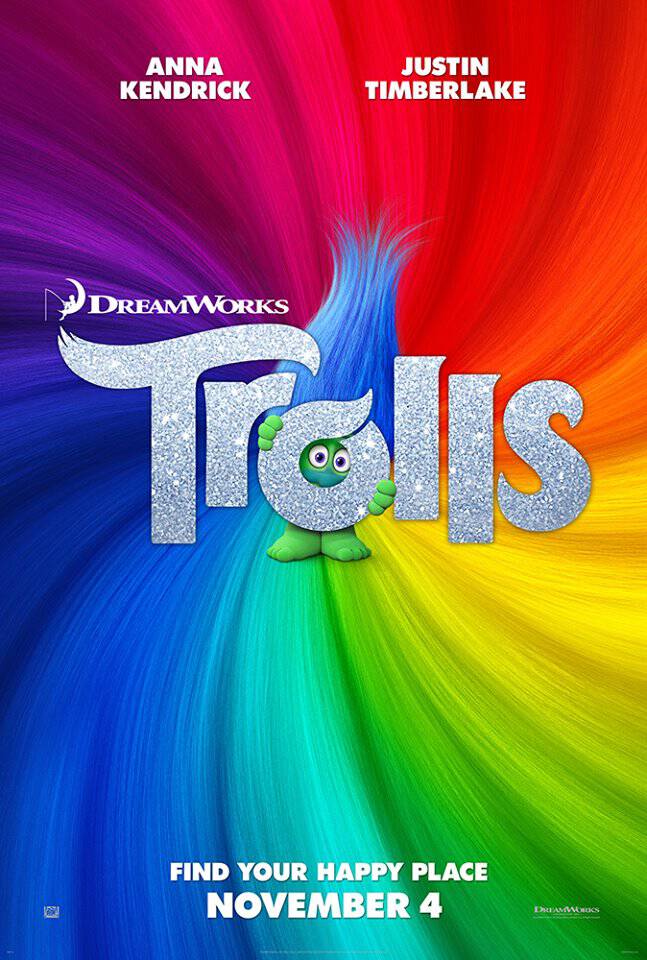 My favorite movies are ones the entire family can enjoy and this one looks adorable! DreamWorks’ Trolls hits theaters November 4 with an amazing voice cast, some great new music, and some trolls we’re all going to seriously fall for.

I have the scoop including the trailer, images, some fun brand partnerships, and a great giveaway below!

From the creators of Shrek comes DreamWorks Animation’s Trolls, a smart, funny and irreverent comedy about the search for happiness, and just how far some will go to get it. This hilarious film transports audiences to a colorful, wondrous world populated by the overly optimistic Trolls, who have a constant dance in their step and a song on their lips, and the comically pessimistic Bergens, who are only happy when they have trolls in their stomachs.

After the Bergens invade Troll Village, Poppy (Kendrick), the happiest Troll ever born, and the overly-cautious curmudgeonly Branch (Timberlake) set off on a journey to rescue her friends. Together, this mismatched duo embarks on a rescue mission full of adventure and mishaps – trying to tolerate each other long enough to get the job done.

Utilizing music to further the film’s narrative, the Trolls soundtrack is produced by Justin Timberlake and features five original songs including songs by Justin Timberlake, Ariana Grande, Anna Kendrick and Gwen Stefani, in addition to a number of classic hits from the ‘60s through the ‘80s.

The trailer below features not only clips from the movie but a little chat with the two stars, Anna Kendrick and Justin Timberlake. They’re great together!

Justin Timberlake can sing this song to me all. day. long. I’m just saying.

Take a look at some of these images from the film. I can already tell we’re going to fall in love with these little cuties!

So cute. I love all of their expressions! You can learn more about Trolls and keep up to speed with them by following along on Facebook, Twitter, and Instagram.

Some of our kids’ favorite products are going to be even more fun! Here’s the info on the brand partnerships. Look for these on shelves soon!

Collect all 4 free Trolls boppers in participating Big G cereal boxes including Cheerios, Lucky Charms, Reese’s Peanut Butter Puffs, Trix, and Cookie Crisp. Participating Go-GURT boxes have a special link to a quiz to identify your Troll personality and to unlock a custom Spotify playlist based on your results.

Also brought to you by General Mills is the Pandora “Rock and Troll” radio station with music inspired by the Trolls soundtrack! Click here to listen. Join the conversation with General Mills by visiting Cheerios and GoGURT on Facebook.

The generous folks at 20th Century Fox, DreamWorks Animation, and General Mills are sponsoring this post and a giveaway for one lucky See Mom Click reader:

*Cereal brand will vary and will include Cheerios, Lucky Charms, Cookie Crisp, Trix, or Reese’s Puffs.