While I was in Los Angeles for the Disney Planes Event I got to take a trip to the Disney Lot, about the coolest place ever! Wouldn’t you like to work in a place that has a street sign like this? I sure would.  It was really fun to tour but the best part of my visit there was hearing all about the upcoming Disney home entertainment releases that will be coming out soon.  We spent some time with David Jessen, the VP of Content Enhancement Production (who has worked for Disney for 18 years!) and he gave us the scoop. So let me fill you in!

Super Buddies looks absolutely adorable! This movie comes out on Blu Ray combo pack on August 27.  This is the seventh Buddies movies and this time they all get to be super heroes with the help of their collars.  There’s tons of humor and a great message that being a super hero comes from within. 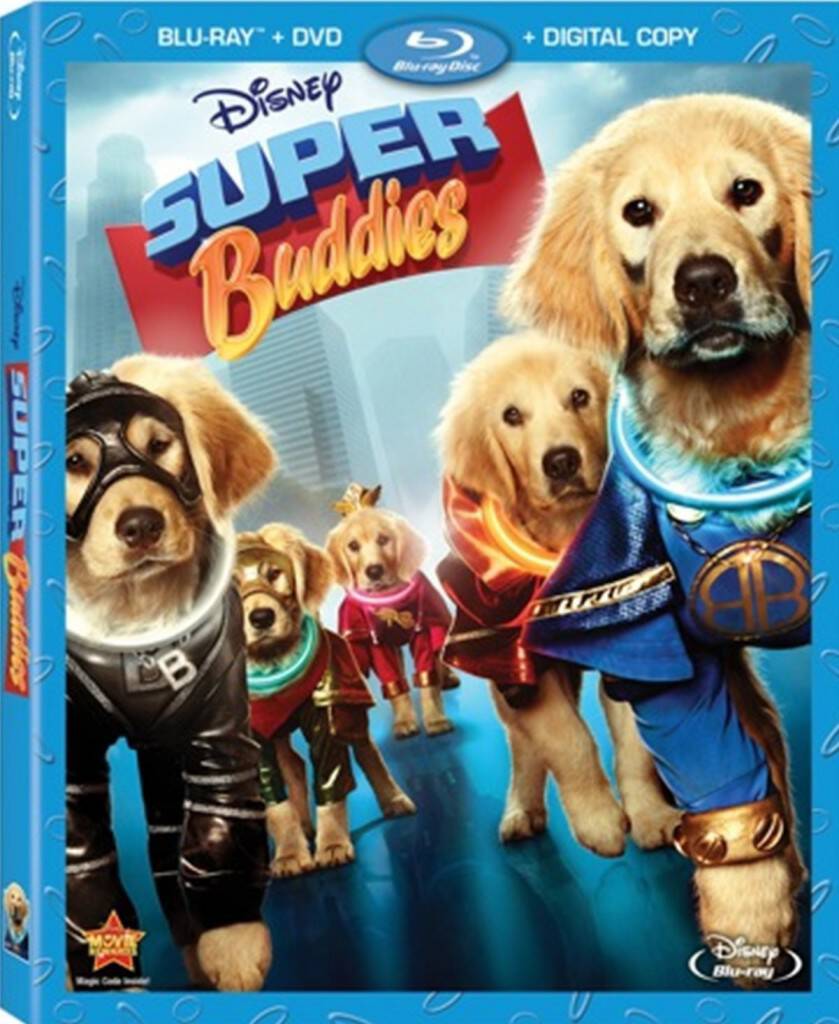 An ordinary day at Fernfield Farms turns extraordinary when Budderball, Mudbud, B-Dawg, Buddha and Rosebud discover mysterious rings that grant them each a unique super power. Before you can say, “Buddies, assemble,” the pups unleash their amazing abilities and race to the rescue when a shape-shifting bully from outer space threatens the planet. But can they succeed in kicking major tail without revealing their new secret identities? A must-own movie event packed with laughter, action and incredible new characters, ‘SUPER BUDDIES’ proves when you use your wits and work together, you don’t need super powers to be a super hero!

I have to admit I’ve never seen this show but after the clips I saw during this preview I totally need to check it out! WOW!  This set releases on September 3. Shonda Rhimes, the genius behind Grey’s Anatomy is also behind Scandal.  The clip we got to see included the ‘Huck episode’ which showed the viewers how he got so broken. In just the short amount of time I watched I was totally hooked and feeling for this character. Amazing acting and an incredible story line.  The show stars Kerry Washington as Olivia Pope, Columbus Short as Harrison Wright, Guillermo Diaz as Huck, Darby Stanchfield as Abby Whelan, Katie Lowes as Quinn Perkins, Tony Goldwyn as President Fitzgerald Grant, Jeff Perry as Cyrus Beene, Bellamy Young as Mellie Grant and Joshua Malina as David Rosen.

Experience every breathless, jaw-dropping moment as Olivia Pope and her team of “gladiators in suits” turn up the heat and raise the stakes in “Scandal: The Complete Second Season.” For Olivia Pope and Associates, cleaning up other people’s messes takes a shattering personal toll.  Season Two blows the lid off Quinn’s identity, exposes Huck’s dark past, and uncovers Olivia’s darkest secret – something so shocking and enormous that it threatens the entire nation. From boardrooms to bedrooms, relive all 22 episodes of the explosive second season of “Scandal” including exclusive, never-before-seen bonus features with this riveting 5-disc set.

Would you believe Nashville is actually shot in Nashville?! It is!  Nashville: The Complete First Season comes out on DVD on September 17.

Behind the music of Nashville lies a captivating web of betrayal, heartbreak and rivalry. Rayna Jaymes is the reigning Queen of Country, yet hot young diva Juliette Barnes is poised to knock her off her throne. Adding more fuel to the fire is Rayna’s rich, scheming father, whose political ambitions for Rayna’s husband hide sinister ulterior motives. Surrender to a seductive mix of music, intrigue and passion with “Nashville: The Complete First Season,” including all 21 tantalizing episodes, and exclusive, never-before-seen bonus features, in a spectacular 5-disc set.

Last but not least by a long shot!  The Little Mermaid Diamond Edition releases on October 1.  This is one of my very favorite Disney movies, maybe my #1.  It’s the first Disney movie I remember watching over and over again as a kid.  On VHS.  Ack, I’m old.  My kids have it on DVD but now it’s coming out on Blu-Ray with some fantastic new features.  Carly Rae Jepsen sings “Part of Your World” in an incredible music video. I got to see it and it’s really, REALLY cool!

Can’t wait!  The Little Mermaid is such a classic.  Another really cool feature I have to tell you about: Feature Animation working on this release to include a new feature called “@DisneyAnimation”.  This is going to debut on The Little Mermaid Diamond Edition and continue on future releases.  So what is it? It’s an inside look at how the new Disney talent, many of turned on to working for Disney by The Little  Mermaid, is inspired by the ‘old’ Disney talent.  And in turn, the old Disney talent gets inspired  by the young people that join the company. It’s such a neat feature, such a fun inside look at Disney. You’re going to love it!

So there’s a lot to look forward to with these great new Disney home entertainment releases coming up this fall.

Disney is generously giving one of my readers an AWESOME prize pack of 7 Disney  movies on DVD! This giveaway will end on September 3 and you can enter to win [HERE].