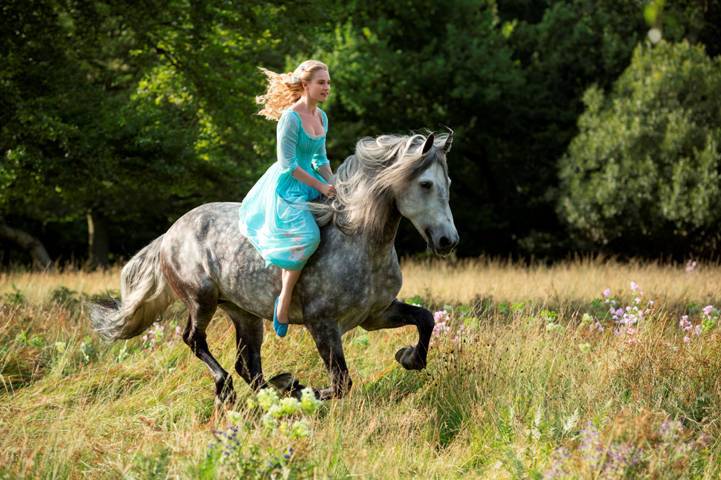 This is going to. be. AWESOME.  Disney’s first every live-action feature inspired by a classic fairy tale is coming to the big screen!  And it’s Cinderella, no less!  The film hits theaters on March 13, 2015. The first image has been released from production which began in London this week.  I can’t wait to see what other news and pictures we get in the coming weeks.  Doesn’t it look incredible?!

Here’s the scoop on “Cinderella”:

Burbank, Calif. (September 23, 2013)—Walt Disney Pictures announced today that principal photography has begun at Pinewood Studios in London, on “Cinderella,” Disney’s first-ever live action feature inspired by the classic fairy tale. Directed by Academy Award®-nominee Kenneth Branagh (“Jack Ryan,” “Thor”), the film stars Lily James (“Downton Abbey,” “Wrath of the Titans”) in the title role, Richard Madden (“Game of Thrones,” “Birdsong”) as the Prince, Oscar®-winner Cate Blanchett (“The Aviator”) as the infamous stepmother Lady Tremaine, and Academy Award-nominee Helena Bonham Carter (“The King’s Speech,” “Alice in Wonderland”) as the Fairy Godmother. Holliday Grainger (“Great Expectations,” “Anna Karenina”) and Sophie McShera (“Downton Abbey,” “Waterloo Road”) play Ella’s stepsisters Anastasia and Drisella, respectively. Stellan Skarsgård (“The Avengers,” “The Girl with the Dragon Tattoo”) and Nonso Anozie (“Game of Thrones,” “The Grey”) play the Arch Grand Duke and the Prince’s loyal friend, the Captain. Tony® Award-winner Derek Jacobi portrays the King. “Cinderella” is produced by Simon Kinberg (“X-Men: First Class,” “Elysium”), Allison Shearmur (“The Hunger Games: Catching Fire”), David Barron (“Harry Potter and the Deathly Hallows,” “Jack Ryan”), from a screenplay by Chris Weitz (“About a Boy,” “The Golden Compass”). The filmmaking team includes three-time Academy Award-winning production designer Dante Ferretti (“The Aviator,” “Hugo,” “Sweeney Todd: The Demon Barber of Fleet Street”), three-time Oscar-winning costume designer Sandy Powell (“The Aviator,” “The Young Victoria,” “Shakespeare in Love”), director of photography Haris Zambarloukos (“Sleuth,” “Thor”) and Academy Award-winning editor Martin Walsh (“Chicago,” “Clash of the Titans”). The timeless story of “Cinderella” dates back to 1697 when first created by Charles Perrault, although it truly came to life for millions all over the world in 1950 with Walt Disney’s celebrated animated feature. Director Kenneth Branagh says: “It is impossible to think of Cinderella without thinking of Disney and the timeless images we’ve all grown up watching. And those classic moments are irresistible to a filmmaker. With Lily James we have found our perfect Cinderella. She combines knockout beauty with intelligence, wit, fun and physical grace. Her Prince is being played by Richard Madden, a young actor with incredible power and charisma. He is funny, smart and sexy and a great match for Cinderella.”

The story of “Cinderella” follows the fortunes of young Ella whose merchant father remarries following the tragic death of her mother. Keen to support her loving father, Ella welcomes her new stepmother Lady Tremaine and her daughters Anastasia and Drisella into the family home. But, when Ella’s father suddenly and unexpectedly passes away, she finds herself at the mercy of a jealous and cruel new family. Finally relegated to nothing more than a servant girl covered in ashes, and spitefully renamed Cinderella, Ella could easily begin to lose hope. Yet, despite the cruelty inflicted upon her, Ella is determined to honor her mother’s dying words and to “have courage and be kind.” She will not give in to despair nor despise those who abuse her. And then there is the dashing stranger she meets in the woods. Unaware that he is really a prince, not merely an employee at the Palace, Ella finally feels she has met a kindred soul. It appears as if her fortunes may be about to change when the Palace sends out an open invitation for all maidens to attend a ball, raising Ella’s hopes of once again encountering the charming “Kit.” Alas, her stepmother forbids her to attend and callously rips apart her dress. But, as in all good fairy tales, help is at hand as a kindly beggar woman steps forward and, armed with a pumpkin and a few mice, changes Cinderella’s life forever.

Production on “Cinderella” will take place at Pinewood Studios and locations throughout England. I’ll keep you posted on all the latest news.  So exciting!!