Disney’s INTO THE WOODS on Blu-Ray and Disney Movies Anywhere released this week and is available to own now! 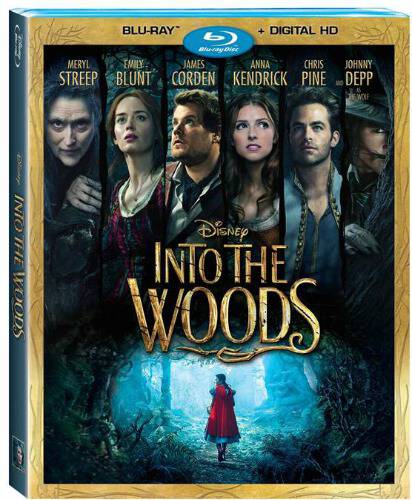 Meryl Streep performs a compelling new song that sheds a little more light on the Witch’s relationship with Rapunzel. This never-before- seen composition was penned especially for this movie by Stephen Sondheim and James Lapine, and is seen here exclusively on Blu-ray and EHV.  With introduction by Director Rob Marshall.

Journey into this mysterious forest to discover how this compelling, new musical was made. Meet Director Rob Marshall and his award-winning team of artists and craftspeople, see how the woods were brought to life…and what they represent to the story…and to all of us.

Get direct access to the musical song segments from the film, with optional sing-along lyrics.

Here are a couple of clips with commentary from the cast and filmmakers, a cool concept art slideshow, and the official trailer:

INTO THE WOODS – Trailer

INTO THE WOODS is rated PG so it’s appropriate for the entire family, though my kids really didn’t care for it much. It’s a musical, so to really appreciate this movie you have to go in with that knowledge and well, like musicals! The scenery and costumes are fantastic and create a strong mood throughout the film. I am a fan of some of the actors in the film and enjoyed watching them perform.  My favorite thing about the movie was the message: Be careful what you wish for!

INTO THE WOODS is out on Blu-Ray on now!