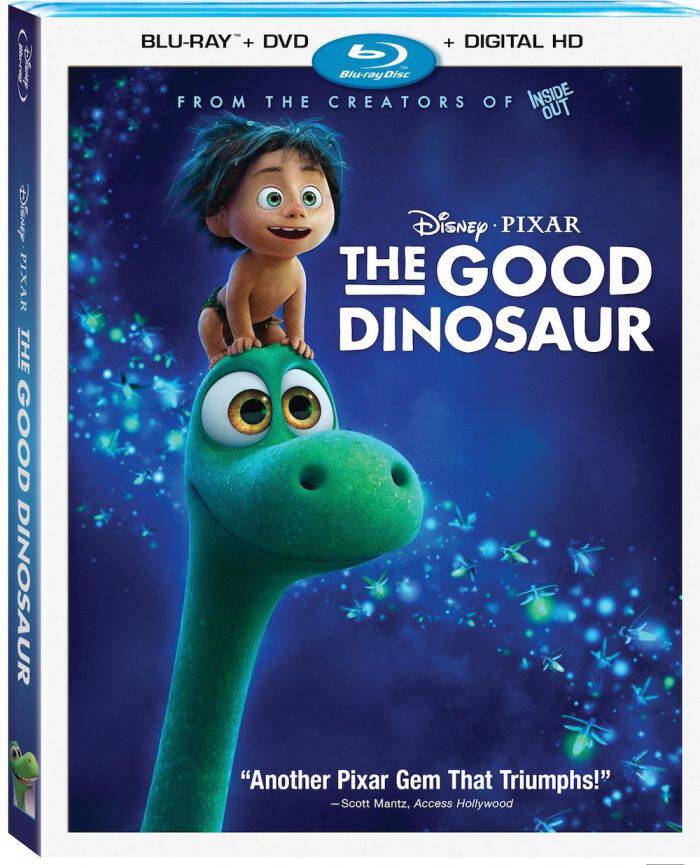 Disney Pixar’s The Good Dinosaur on Blu-Ray, Digital and Disney Movies Anywhere is available to own now! We were sent a review copy and just watched it this week as a family. This movie is just adorable!

It is SO good. I really loved it and so did the kids. As you’d expect from Disney Pixar, The Good Dinosaur is a sweet story about an underdog that never gives up and ultimately finds himself. Along the way there are some fun and wild adventures and really awesome supporting characters/prehistoric animals. The friendship between Arlo and his boy, Spot, is made even sweeter because Spot doesn’t speak so they communicate with a lot of expression that gives you all the feels.

Speaking of feels, I sat through several moments in the movie with a big ole lump in my throat and then toward the end, I was full on crying along with my daughter. You get me every time, Disney! I have to add, though, that there were some HILARIOUS parts of the movie that we actually went back after we finished and watched again.

The Good Dinosaur is a great story with lovable characters, and tons of heart – plus plenty of laughs! This is the whole package and I’m so glad we’ve added it to our home collection.

We watched all of the bonus features after finishing the movie, too. There are some GREAT ones on this disc! I love being able to see the research that goes into these films and share that with the kids. Plus the bonus short film, Sanjay’s Super Team, is also included! Here’s a better look at the bonus material:

THEATRICAL SHORT – Sanjay’s Super Team – Sanjay loves the world of cartoons and comics, while his father tries to draw him into his Hindu traditions. Reluctance quickly turns into awe-inspiring adventure as the boy embarks on an amazing journey, returning with a new perspective they can both embrace.

TRUE LIES ABOUT DINOSAURS – We know – it’s preposterous to think Apatosaurs spoke English. Learn more about what separates the fictional dinosaurs of “The Good Dinosaur“ from what scientists know about real dinosaurs.

RECYCLOSAURUS – Pixar takes creative competition seriously. Maybe a little too seriously. Watch as “The Good Dinosaur” crew competes to see which department can create the best dinosaur ever…using only discarded items from the studio’s “free table.”

THE FILMMAKERS’ JOURNEY – Finding your way from an idea to a film takes a lot of exploration. Director Peter Sohn and his fellow filmmakers talk about the challenging, inspiring, and unexpectedly emotional experience of making “The Good Dinosaur.”

EVERY PART OF THE DINOSAUR – The filmmakers talk about the special animation challenges of “The Good Dinosaur” – including figuring out how to animate a dinosaur who’s really a boy, and a boy who’s got the spirit of a dog.

The Good Dinosaur – Finding The Roar

FOLLOWING THE T-REX TRAIL – Follow the filmmakers as they travel to a working cattle ranch and meet the McKays, a close-knit family whose work ethic, generosity, and stories inspired the T-Rex ranchers of the film.

HIDE AND SEEK – A short animated clip produced to promote “The Good Dinosaur.”

The Good Dinosaur – Hide and Seek

o   The Attack  – An idyllic introduction to the family farm is cut short when a savage predator attacks the newborn Arlo. With an introduction by Director Peter Sohn.

o   Building the Silo – An admiring Arlo is thrilled to follow along as his father builds a silo for the family farm. With an introduction by Director Peter Sohn.

o   Waiting for Poppa – Arlo awaits the return of his beloved father on a stormy night, only to be greeted with tragic news. With an introduction by Director Peter Sohn.

Stay up to speed with the latest by following THE GOOD DINOSAUR on Facebook, Twitter, and Instagram.  And go order your family’s copy of The Good Dinosaur now!

THE GOOD DINOSAUR has on Blu-Ray and Digital and is available to own now!

Disney’s The Good Dinosaur is available to own now + my review. (We loved it!) AD https://t.co/wrqoTyfRa2 #GoodDino pic.twitter.com/clVBRGhg5m