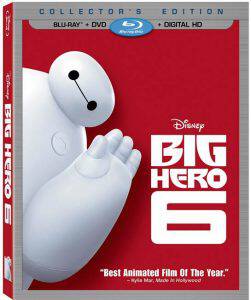 I can’t wait to add this one to our home collection so we can see it again! Disney’s BIG HERO 6 on Blu-Ray releases on February 24 and is available to order NOW! Amazon currently has it on sale at it’s lowest price, only $14.99 for DVD and $18.90 for Blu-Ray.  We LOVED this movie in the theater!

With all the heart and humor audiences expect from Walt Disney Animation Studios, “Big Hero 6” is an action-packed comedy adventure that introduces Baymax, a lovable, personal companion robot, who forms a special bond with robotics prodigy Hiro Hamada. When a devastating turn of events catapults them into the midst of a dangerous plot unfolding in the streets of San Fransokyo, Hiro turns to Baymax and his diverse group of friends — adrenaline junkie Go Go Tomago, neatnik Wasabi, chemistry whiz Honey Lemon and fanboy Fred — who transform into a band of unlikely heroes. Bring home Disney’s “Big Hero 6,” featuring comic-book-style action and hilarious, unforgettable characters — it’s fun for the whole family!

What?! I didn’t notice any of those! Did you? 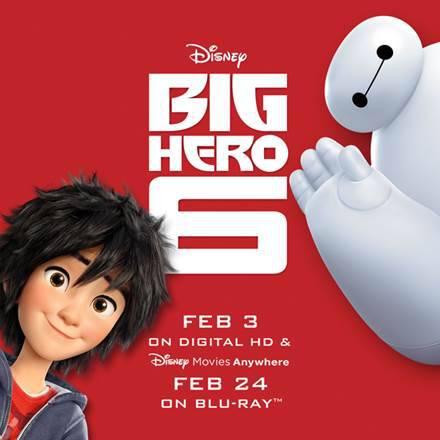 See BIG HERO 6 even earlier with Disney Movies Anywhere, the free app for your tablet or phone. It will be available on DMA and Digital HD on February 3.

Head over to Amazon and pre-order your copy now!

You can find more fun info including free BIG HERO 6 coloring pages and activity sheets in these posts!

Amazon can change their prices at any time so please verify the current price before buying.  If you’re not an Amazon Prime member check it out with this free 30-day trial! You’ll get free 2-day shipping on most items – no minimum order, access to streaming movies and TV shows, and free Kindle books!