Disneynature’s Wings of Life will be released on Blu-Ray/DVD Combo pack on Tuesday April 16, just in time for Earth Day.  My whole family loves nature movies and we are really looking forward to this one!  I was fortunate enough to get a preview of the film and it is simply amazing.

“Life depends on little things we take for granted.”

This quote appears at the beginning of the film and is really the thesis for the whole movie.  I’m a pretty avid gardener and bird watcher and consider myself relatively knowledgeable about nature.  But I had no idea how the ‘little things’ are what we depend on to sustain life. 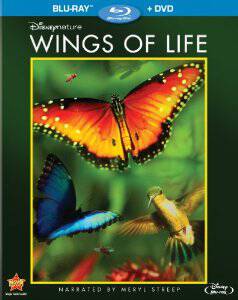 The movie is narrated my Meryl Streep who has the perfect voice to talk about flowers, hummingbirds, and butterflies.  Definitely two thumbs up on narrator choice, Disneynature!  I’m sure she didn’t write her own script but she does a fantastic job of explaining everything that’s happening in the film.  My daughter is 7 years-old and my son is 4 years-old and they both gained a lot from the movie. When I asked my daughter what her favorite part was she replied, “I liked when the bucket orchid attached it’s pollen sacs to the orchid bee.”  Whoa, right?! I love how much they learned watching, and how films like this keep their interest in nature piqued.

Wings of Life is told from the point of view of a flower!  That’s so unique right off the bat.  We learn how flowers use their yummy scents and nectars and pretty petals to attract winged creatures – bees, butterflies, birds, even bats – to visit them and in turn, take some of their pollen with them to the next flower and give the flowers a shot at reproduction.  My daughter was totally right: The coolest part of the movie is right in the beginning when you get to watch a bee fall into some sticky fluid inside the bucket of an orchid, and in the process of climbing out the flower actually squeezes the bee and attaches with ‘glue’ two pollen sacs to its back.  I mean, how do you even know this stuff is happening let alone film it?!  The close up shots are truly incredible.  Just unbelievable. Take a look at the trailer above and you’ll get a glimpse for yourself.

My kids love to collect caterpillars and grow them into butterflies in their butterfly houses.  The pictures above are of a swallowtail they found, his cocoon, and his release. They love nature, as most kids do.  So they were totally into the part of Wings of Life where we get to see thousands and thousands (millions?) of monarch butterflies all in one place.

It’s like a carpet of monarchs!  The film shows exactly how they build their cocoon and how they emerge.  We all know these things happen, even my kids who raised that swallowtail got to see this life cycle in action. But you don’t realize the intricacies involved.  And all the while we’re learning about these pollinators from this movie, my mouth is hanging open thinking ‘How in the world did they film this?’

Here’s another sneak peek for you, this one of a hummingbird dancing through the air.  Did you know a hummingbird can flap its wings up to 200 per SECOND?  I can’t even picture that, and yet somehow the film makes it appear in slow motion. It’s totally amazing.

From Disneynature, the studio that brought you Earth, Oceans, African Cats and Chimpanzee, comes Wings of Life — a stunning adventure full of intrigue, drama and mesmerizing beauty. Narrated by Meryl Streep, this intimate and unprecedented look at butterflies, hummingbirds, bees, bats and flowers is a celebration of life, as a third of the world’s food supply depends on these incredible — and increasingly threatened — creatures.

Wings of Life will be available on Blu-ray™ Combo Pack, Digital and On Demand on April 16.   You can order on Amazon here. I would love to know what you and your family think of the movie!  My family completely LOVES it.  I definitely recommend it to anyone that’s a nature lover, gardeners, bird watchers, and little kids who spend their summers outside collecting caterpillars and chasing butterflies.   😉

Stay up to speed with all the latest Disneynature news by following along on Facebook and Twitter!

I was provided with a complimentary copy of  Disneynature’s Wings of Life to facilitate this review.  The opinions in this post are 100% mine.  You can read my full disclosure policy here.