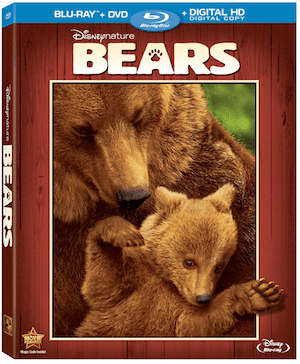 Disneynature BEARS on Blu-Ray will be released on August 12.  I’m so excited to bring this one home for the family. We love the Disneynature collection and this movie was so awesome.  An amazing look at bears in the Alaskan wilderness. Wow!

This spectacular film showcases a year in the life of a bear family as two young cubs are taught life’s most important lessons. To celebrate the in-home debut of “Bears,” Disneynature is proud to continue the conservation program initiated with the film’s theatrical release. For every purchase of the movie through August 19, 2014, Disneynature will make a donation through the Disney Worldwide Conservation Fund to the National Park Foundation, the official charity of America’s national parks,to further protect and conserve endangered or threatened wildlife and wild places as well as enhance field research across more than 2.9 million acres of National Park Service land.

You can pre-order your copy of Disneynature BEARS on Blu-Ray on Amazon now!