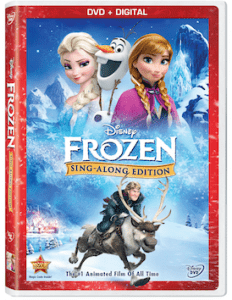 “Do you want to build a snowman?”  Good news, then.  Disney FROZEN Sing-Along Edition will be releasing on November 18 just in time for the holidays!

Experience Frozen, the hit musical comedy from Walt Disney Animation Studios, like never before in a new to DVD, full-length Sing-Along Edition! Follow the lyrics with a bouncing Frozen snowflake. Join Anna as she sets off on an epic journey – teaming up with rugged mountain man Kristoff and a snowman named Olaf – to find her sister Elsa, whose icy powers have trapped the kingdom of Arendelle in eternal winter. It’s pure enchantment – and full of fun for the whole family!

Here’s a taste in this trailer:

Now I’ll be singing FROZEN songs all day long!  You’ll be able to pre-order your copy of FROZEN Sing-Along on Amazon soon!