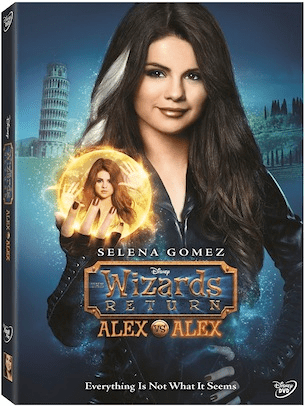 If your kids are fans of Disney Channel’s Wizards of Waverly Place, here’s a heads up on a new DVD coming out this summer that they’re sure to love!  Disney Channel’s hit special event “The Wizards Return: Alex vs Alex,” starring superstar sensation, Selena Gomez reprising her role as Alex Russo, makes its highly-anticipated debut on DVD – June 25, 2013!   Making the release a must-own, the DVD debut of “The Wizards Return: Alex vs Alex” also contains the final episode of the original series ‘Wizards of Waverly Place,’ the most-watched series finale in Disney Channel’s history.    “Overflowing with big adventure, stunning special effects, epic stunts, exotic locales, and supernatural elements, “The Wizards Return: Alex vs Alex” is an exciting collectible for any Wizards fan and a fantastic adventure for the whole family.”

The Russo family headed to Italy, to meet their long lost relatives… but when Alex (Selena Gomez) tries to prove she’s more than a seemingly carefree young Wizard, she inadvertently conjures a spell that creates a Good Alex and an Evil Alex. When Evil Alex gets roped into a charming young wizard’s foreboding plan to take over the world, Good Alex must find a way to save her family and humankind, which leads to a monumental battle between the two versions of herself – all atop the Tower of Pisa.

Check out the all-star cast!

This DVD will be released on June 25.  You can pre-order on Amazon here!