I was provided with a complimentary copy of DELIVERY MAN on Blu-Ray to facilitate this review. The opinions in this post are 100% mine. You can read my full disclosure policy here. 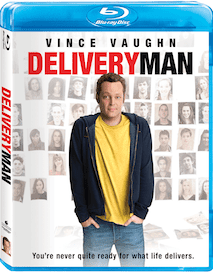 DELIVERY MAN is now out on Blu-Ray and DVD! My husband and I just watched it this week and we both loved it.  Vince Vaughn is always a hit with both of us. We love his movies and this one was no different. He’s so hilarious, and parts of this movie made me tear up, too.

In this heartwarming comedy, underachiever David Wozniak (Vince Vaughn) learns he’s actually an overachiever — he’s fathered 533 children via donations made twenty years earlier! David soon discovers that the shock of his life might just be the best thing that’s ever happened to him. Along the way he discovers not only his true self, but also the father he could become. Also starring Chris Pratt and Cobie Smulders — and complete with bonus materials, including behind-the-scenes footage — it’s a feel-good movie that really delivers.

It was awesome to watch David’s priorities and behavior change once he realized he was a father. Having children changes everything, doesn’t it? And I love that he tried to be the guardian angel for his kids.  Those scenes were my favorite.  I’ve done so many little things for my kids without their knowledge. It’s what you do as a parent, right?  While I couldn’t relate to having 533 kids (oh dear, no thank you), I could definitely relate to his love for his kids and desire to help and protect each of them.  Such a great movie!

I have a bunch of my favorite clips for you to check out!

“Yo No Soy David Wozniak”

“What Did You Guys Think?”

“I Don’t Have Mental Problems”

So awesome! I love that deleted scene too.  That’s one of the bonus features along with these:

DELIVERY MAN is a hilarious, feel-good movie you’ll want to watch over and over. We loved it!  You can grab your copy now on Amazon.