I am SO excited for this new Disney movie coming out this summer!  Planes hits theaters on August 9, 2013.  My son is seriously a Cars FREAK and he is going to flip over this movie!  It looks so cute! 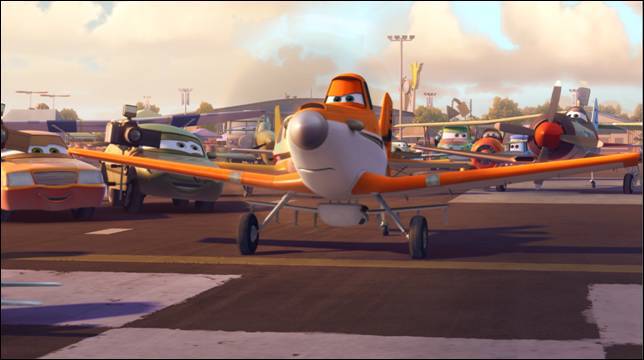 Dane Cook has been tapped to voice the lead character Dusty, a plane with high hopes in “Disney’s Planes.” Inspired by the world of “Cars” and directed by Disneytoon Studios veteran and aviation enthusiast Klay Hall (“King of the Hill,” “The Simpsons”), “Disney’s Planes” is an action-packed 3D animated comedy adventure about Dusty’s dream of competing as a high-flying air racer—and his decidedly unfortunate fear of heights. The film takes off in theaters in 3D on Aug. 9, 2013.

Cook is well known for his appearances on Comedy Central and HBO specials, and for his successful comedy albums. He recently guest starred on “Louie” opposite Louie C.K., and his film credits include starring roles in a host of films, including “My Best Friend’s Girl” opposite Kate Hudson, “Dan In Real Life” opposite Steve Carell, and “Mr. Brooks” opposite Kevin Costner. The actor/comedian just signed a deal with NBC Entertainment and Universal Television to develop a new project starring Cook.

The all-new story offers an exciting cast of characters and centers on Dusty’s high-flying dream. But Dusty’s not exactly built for racing, so he turns to a seasoned naval aviator who helps Dusty qualify to take on the defending champ of the race circuit. Dusty’s courage is put to the ultimate test as he aims to reach heights he never dreamed possible, giving a spellbound world the inspiration to soar. The film is produced by Traci Balthazor-Flynn and executive produced by John Lasseter.

Doesn’t it sound cool?  I know my kids are going to love it!  Stay up to speed (pun intended!) with all the latest Planes news by following on Facebook and Twitter!