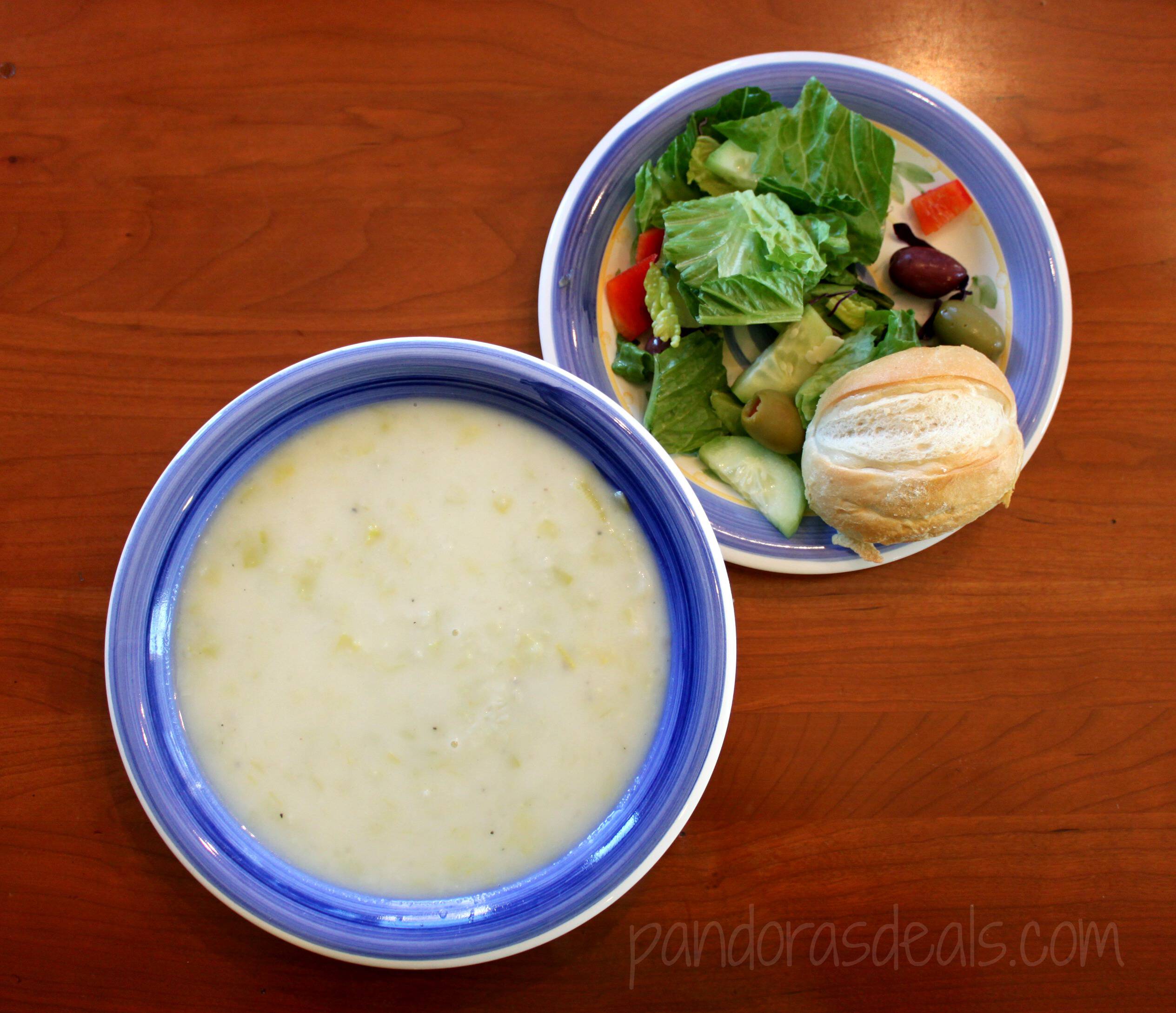 This Leek and Potato Soup is one of my favorite comfort-food recipes.  It’s delicious, filling, and it’s one of those foods that’s even better on day two! Either soup is really hard to photograph or I have some learning to do (maybe some of both) but these pictures don’t do the recipe justice.  It’s absolutely delicious and has become our traditional Christmas Eve meal to share with friends.  It’s fancy enough for a dinner party and simple enough for every day meals, too.  It’s a winner! 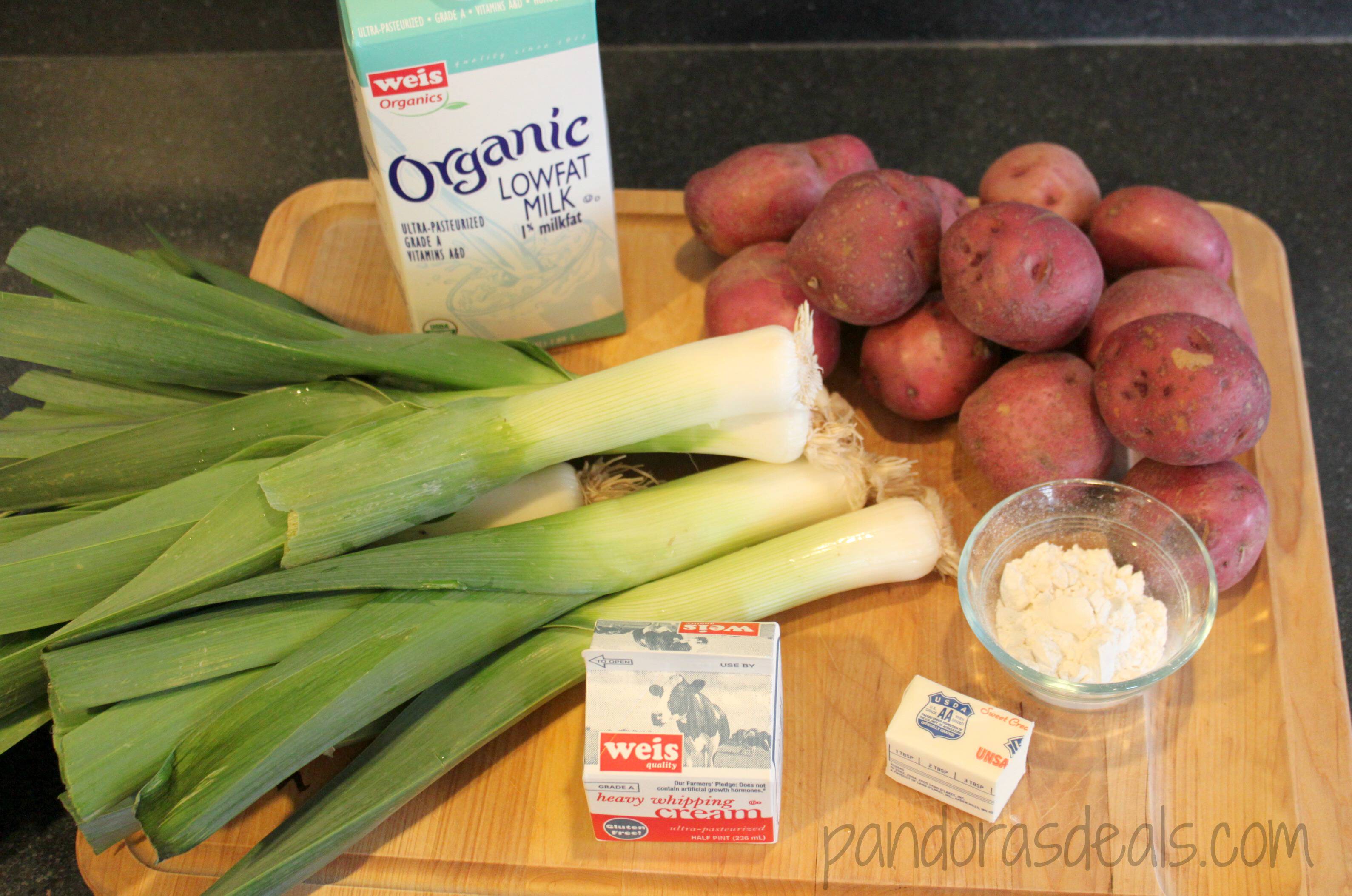 Here are all of the ingredients. Pretty simple stuff: Two bunches of leeks (those are the green things that look like big onions), potatoes, butter, flour, milk, and heavy cream. You’ll also use water and salt and pepper but I figure we’ve all got that on hand.  And I’m notorious for forgetting something in the ingredients pictures! 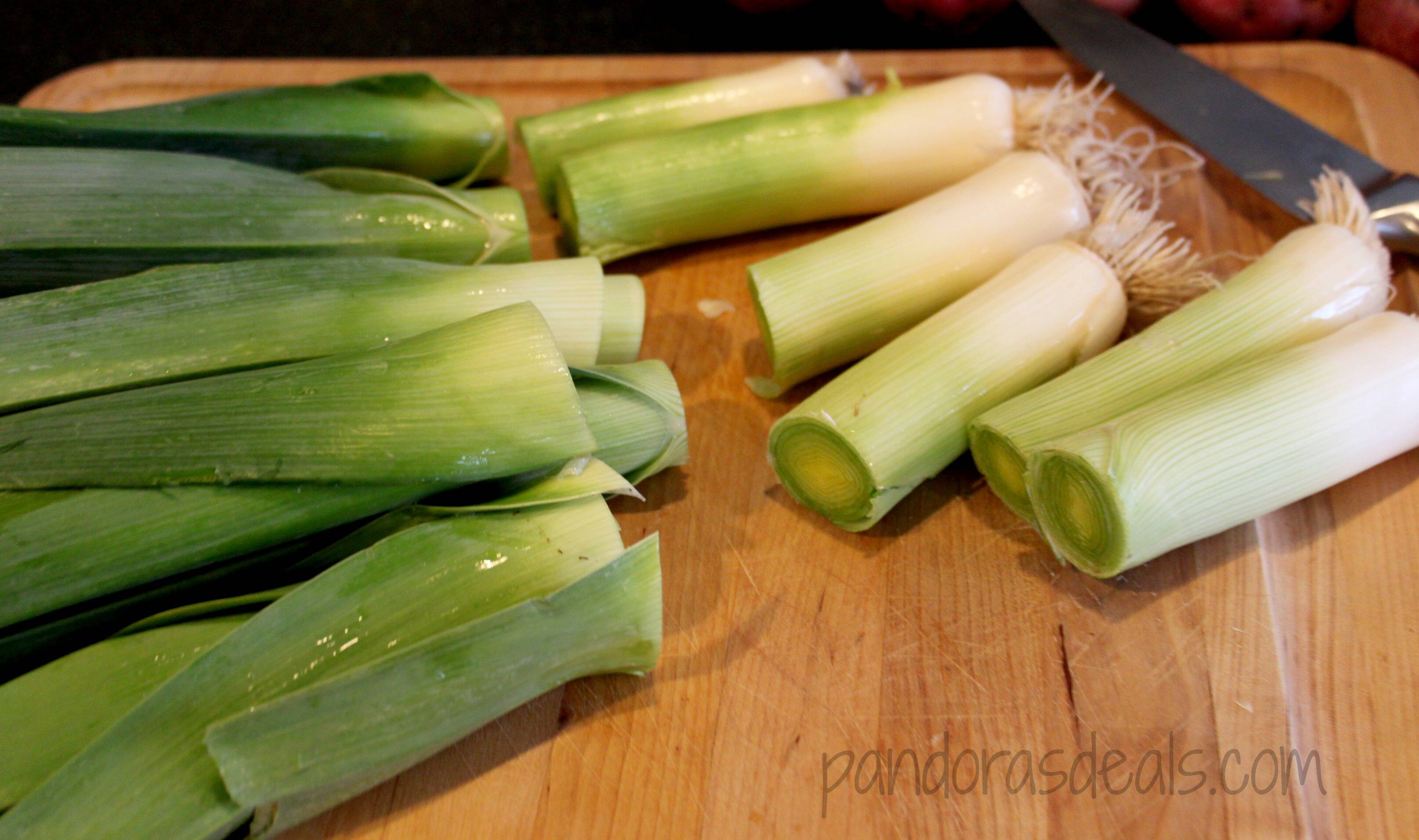 If you’ve never cooked with leeks before they might be a bit intimidating.  Don’t be scared, though! Think of them like a giant scallion. They’re related to onions, just milder in flavor and they’re fantastic in this soup.  To start you’re going to cut off the long green ends.  Cut down to the part where it starts to turn white.

Then trim off the little roots on the end.

Leeks grow underground so they can be pretty dirty. This batch I got wasn’t too bad. I’ve seen them much worse.  So the after I get them all trimmed up I peel off the outer one or two layers and throw that part away.

Then take a knife and cut them into little circles.  Cute little guys, right?  You’ll be able to see how dirty your leeks are when you start cutting.  If there’s a particularly dirty spot, just trim it out and trash it.  Otherwise, cut all your leeks into circle pieces and put them in a colander.  Rinse them well and separate any circle pieces that need a rinse in the middle.  This sounds a lot more tedious than it is. It’s not a long process.

These circles look cute but they’re all going to come apart in the soup so don’t worry about keeping them together while you’re cleaning them.

Peel and quarter the potatoes.

Then you’ll be ready to rock!  All of the ingredients cook together in the soup for about 40 minutes until the potatoes are tender.

Then I take my hand mixer and give it a rough mix just to blend it a bit. I don’t want it super smooth. I like it chunky but all the same consistency, no big chunks of potatoes. This is my preference but once it’s cooked you can serve it however you’d like to.  Put it together with a salad and a hunk of crusty bread and you’ve got a delicious meal!

In a stockpot melt the butter over medium heat. Add the leeks and stir. Cover the pan and cook for 5 minutes without browning. While the leeks are cooking you can be heating the water. Put 6 cups of water in a pot and heat on the stove. You don't need it boiling, just warmed up.

After 5 minutes, take the lid off the pot and add the flour to the leeks. Stir well and cook for about 2 minutes without browning. Remove from heat.

Whisk in about 1 cup of the hot water until well-mixed with the flour and leeks.

Slowly whisk in the rest of the water. Add the salt and pepper. (A note about the salt: Potato soup is hard to get exactly right. You should be safe with 1/2 tablespoon and not over-salt it. However, you may need to add more at the end to get the taste perfect.) Add the potatoes.

Bring the soup to a boil, then lower the heat and partially cover it with the lid. Simmer for about 40 minutes until the potatoes are tender.

Stir in the cream.

I like to take my hand mixer and roughly blend the soup at this point. You can blend it to whatever consistency you like best. Just be careful you don't splash hot soup on yourself!

Have a taste and add more salt if needed.