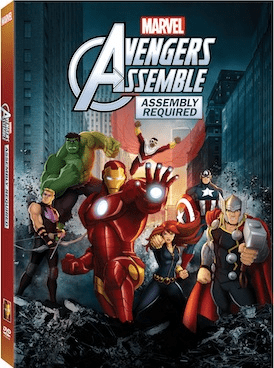 Can the world’s most powerful team of Super Heroes put aside their differences and learn to live together under one roof long enough to save the world from ultimate destruction? The answer will be revealed when the Red Skull and M.O.D.O.K. wage war on The Avengers. Bring home all the thrills and non-stop action, complete with never-before-seen footage and bonus features!

Check out these clips:

First Day Jitters: Black Widow attacks Falcon and Iron Man jumps in to help while the Hulk pops in with a surprise

Iron Man Breaks the Mind Control:  Iron Man uses his powers to help the Avengers gain back control of their minds

Looks like a great one for Marvel fans! You can order Marvel’s Avengers Assemble: Assembly Required on Amazon and add it to your kids’ collection!