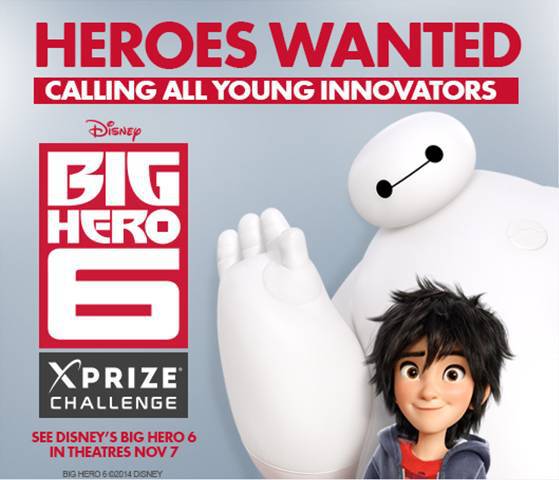 This is an AWESOME contest! If you have kids ages 8-17 (or know some you can pass this on to), read on. XPRIZE is launching a video contest for 8-17 year-olds to form the real-life BIG HERO 6! Six Winners will win a trip to LA to walk the Red Carpet at the Hollywood Premiere of Disney’s BIG HERO 6 and go behind the scenes of Walt Disney Animation Studios! I have visited Disney Animation Studios myself and it is just…amazing. This is such a cool opportunity for kids!

XPRIZE has joined forces with Walt Disney Studios Motion Pictures and Disney Corporate Citizenship for today’s launch of a nationwide video contest designed to find the real-life counterparts to the animated heroes that will soon burst onto the big screen in “BIG HERO 6,” an action-packed comedy-adventure from Disney opening November 7, 2014.

The DISNEY BIG HERO 6 – XPRIZE CHALLENGE invites young people between the ages of 8 and 17 to harness their creativity and come up with innovative ideas to tackle the world’s biggest challenges using science, technology, engineering, art and/or mathematics.

The six winners, the real-life “Big Hero 6,” will travel to Los Angeles to walk the red carpet at the film’s Hollywood premiere in early November, go behind the scenes and meet the creative minds at both Walt Disney Animation Studios and Walt Disney Imagineering, join a special “Visioneering™” experience at XPRIZE headquarters, plus other prizes.

Video Submissions will be judged on innovation, creativity and presentation. Twenty (20) finalists will be selected based on the highest scores resulting from preliminary scoring by XPRIZE judges.  In mid October, a panel of luminary S.T.E.A.M. expert judges will evaluate the twenty finalists’ submissions and six (6) winners will be selected through a combination of the expert judges’ scores and public voting results.

Kids can enter to win right here.  And check out all of the official rules first.