Last time I took the kids to our local Build-A-Bear Workshop we had so much fun.  My son picked a camouflage bear and dressed him up in a crazy outfit.  My daughter’s  bear was all pink, of course.  Build-A-Bear has just released a brand new batch of awesome animals, their Farmer’s Market Collection.  My lucky kids had the opportunity to review the Sheep and we love him, so much so that we fight over him.  Poor Sheep.   😉

Farmer’s Market Collection Build-A-Bears are soft and cuddly.  My son and I were the ones to answer the door when our Sheep was delivered and we both immediately fell in love.  This guy is soft and cuddly.  Our other Build-A-Bears are a little more rigid.  I don’t know if that’s because the kids stuffed them to the gills when we made them in the store, or because their are just stiffer bears (I sorta think it’s the former), but I really like the floppiness of the Sheep.  So comfy for the kids to snuggle with!

There are several cute animals to choose from.  There’s a Horse, Pig, Sheep, and Cow.  And check out the cute little smallfrys Pig and Cow.  Like little farm animal babies!  If you order online you’ll be able to choose from two online-exclusive animals, too: the Llama and the Billy Goat.  Aren’t they all so cute? 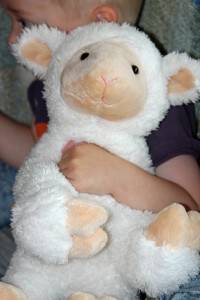 Little kids love farm animals.  I don’t know about you, but some of my kids’ first words were animal names and sounds.  Kids love animals, especially farm animals. We have tons of books with farm animals in them.  They’re just familiar and somehow more endearing that other critters.  My son was so smitten with our Sheep, he immediately named him Bob.  I think that’s spelled more like Baaaaab.  Get it?  And my kids like to fight over poor Bob, taking turns letting him sleep in their beds at night.  You can kind of see the death grip my little guy has on his buddy.  I think we’ll have to hit the mall and grab ourselves another farm animal for our at-home zoo to try to cut down on the Bob battles.

Making your own Build-A-Bear is so fun.  When I took the kids to make their bears they had a blast.  All the ways you can personalized your creatures are so neat.  They loved stepping on the pedal to stuff their bears, washing them off in the shower, and most of all, picking out their clothes.

Stay up to speed with all of Build-A-Bear Workshop’s latest promos and products by following them on Facebook and Twitter.  Be sure to follow on Pinterest, too.  I just love Pinterest, don’t you?  And Build-A-Bear even has their own FREE app for iPhone users.  Lots of ways to stay in touch.

Build-A-Bear Workshop is generously offering one of my readers a Build-A-Bear from the Farmer’s Market Collection!  Build-A-Bear Workshop will choose the prize for the winner: the Horse, Pig, Cow, or Sheep! This is one of those good surprises since I think it’s about impossible to choose which one is cutest. This giveaway ends on May 29, 2012.  You can enter to win here.

I was provided with a Farmer’s Market Collection Build-A-Bear free of charge to facilitate this review.  The opinions in this post are 100% mine.  You can read my full disclosure policy here.