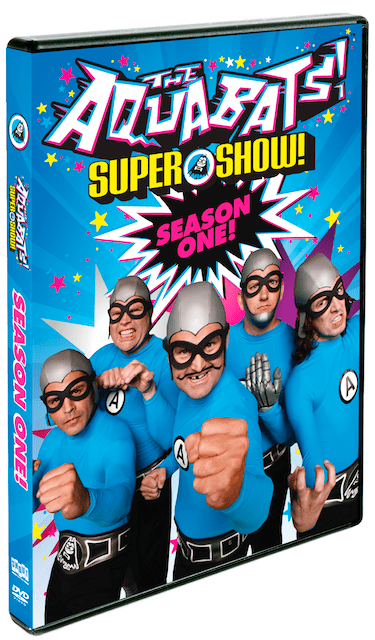 Aquabats! Super Show! Season One! comes out on DVD on May 21.  We got a copy to preview and my kids LOVE this DVD! I sat down and watched it with them too and it got several audible laughs out of me too!

From the Co-creator of Yo Gabba Gabba!, Aquabats! frontman Christian Jacobs has crafted the perfect blend of live-action and animation  following the amazingly wild comic antics of The Aquabats, the galaxy’s first group of musical, crime-fighting superheroes. MC Bat Commander, Crash McLarson, Ricky Fitness, EagleBones Falconhawk and Jimmy the Robot will take you along on their most outrageous adventures to protect the world from the creatures and super villains out to destroy it.

You can take one look at the DVD case and know that this show is full of laughs.  You can watch the show on HUB TV Network where Season Two will be starting soon.  But if you’re like us and don’t get all these channels, it’s nice to be able to catch some fun shows on DVD.  I have to admit, I wasn’t sure what to expect here since we’d never seen the show, but it was an immediate hit and my kids were begging me, “Just one more show! Please just one more!” when I told them it was time to turn it off.

These DVDs includes all 13 episodes from the first season:

Ack! I can’t remember which one it was where it was raining mini hamburgers and they were singing about it, but that was my favorite.   😀    This 2-disc set also includes some great music videos and bonus features. Special guests on the show include “Weird Al” Yankovic, Lou Diamond Phillips (Southland), Samm Levine (Freaks & Geeks), Jon Heder (Napoleon Dynamite) and more.

Aquabats! Super Show! Season One! is definitely a hit with my kids.  You can pre-order the DVD set on Amazon.  It will be released on May 21!

I was provided with a complimentary copy of Aquabats! Super Show! Season One! to facilitate this review.  The opinions in this post are 100% mine.  You can read my full disclosure policy here.