I received complimentary tickets to the Adventure Aquarium to facilitate my review. The opinions in this post are 100% mine. You can read my full disclosure policy here.

Our family visited the Adventure Aquarium in Camden, New Jersey recently and had a blast! It’s a nice place to visit year-round, no matter what the weather. It’s been especially cold here lately so it was a great way for us to get the kids out of the house and do some exploring indoors. Getting there was pretty easy; it’s just minutes from downtown Philadelphia on the Delaware waterfront, with beautiful views of the Philly skyline. The aquarium “features more than 8,500 aquatic species throughout two million gallons of water and is the only aquarium in the world to exhibit hippos and is also home to the largest collection of sharks on the East Coast – including a Great Hammerhead Shark!” 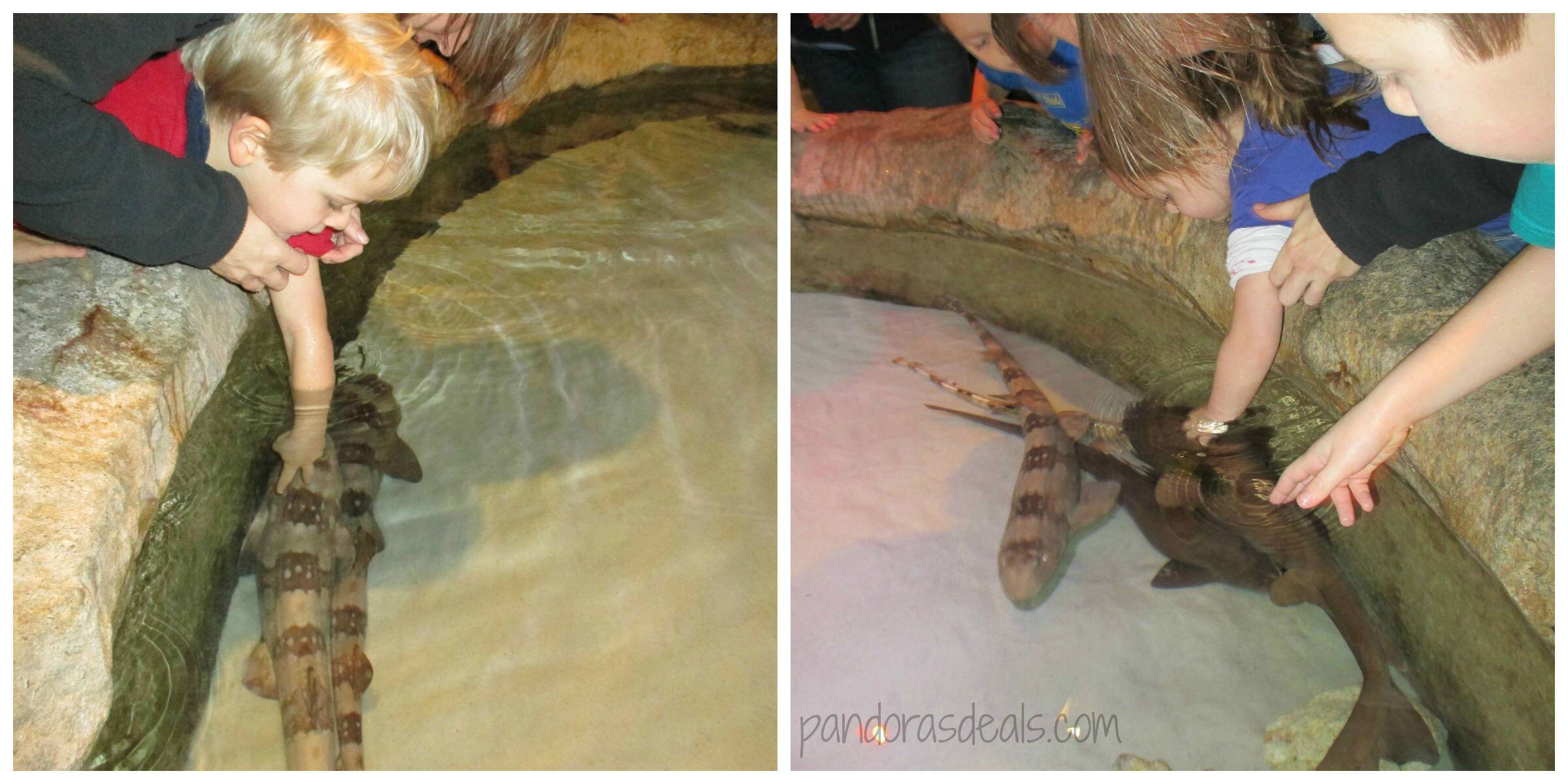 There are so many neat exhibits at the Adventure Aquarium! The Touch-a-Shark area is so cool…both kids reached right in and touched the bamboo sharks!

We also loved the Stingray Beach Club! We timed our visit to this exhibit so we could feed the stingrays. The kids were a little scared and ended up dropping the food in the water without hand-feeding them, but my husband took over and let a few eat right out of his hand . To the kid’s defense, the stingrays were HUGE! There was also a much smaller stingray pool down at the kid’s level, where they both enjoyed watching and petting the smaller stingrays which were much less intimidating.

Another favorite of the day was the Creature Feature exhibit which is an “inter-tidal marine ecosystem, where you can reach your hands into the cool water to TOUCH exotic and colorful sea stars, anemones, sea cucumbers, shrimp, crabs, snails and more.” We learned so much at this exhibit from an aquarium specialist who was really great interacting with the children, asking them questions and really piquing their interest about the neat sea creatures.

My daughter is obsessed with frogs lately, so their newest exhibit, Frogs: Nature’s Messenger was awesome! We learned so much about frogs while exploring this exhibit.  I think she was most fascinated learning about how frogs can change colors. She really loved staring into the frog habitats, watching them move around. Many were down low at her level and she could really get a good look at them. It was a challenge to find some of the smaller, or more camouflaged frogs and we made a fun game out of it with the kids to see who could find the frogs first! There were a lot of fun and interactive activities where we learned many things about frogs we never knew:

Adventure Aquarium has a special area called KidZone: “a dedicated space that encourages kids 6 and under to connect with nature by getting hand’s on.  The exhibit features a collection of vibrant and colorful animal species, as well a bright and cheerful décor, lower exhibit heights for easy viewing and interactive games, activities and touch experiences that promote learning through play.” The “pop-up” exhibits were really cool and the kids loved getting “inside” and seeing the fish from another viewpoint. There’s also a play space for kids to climb and crawl around and help release some energy!

We even got to see a movie at the aquarium, SpongeBob SquarePants 4D: The Great Jelly Rescue. My daughter and nephew had a blast and it was well worth the additional $3 for the movie.

We really enjoyed our visit to the Adventure Aquarium. There was so much to see and do and we all learned a lot while having so much fun! Even my 13-month old seemed to thoroughly enjoy herself, just observing everything. The hands-on areas were definitely our favorite part. My 3 year old daughter was a little hesitant with some of it, but my nephew (almost 5 years old) didn’t hold back at all! I highly recommend a visit to the aquarium; it’s fun for all ages!  We’ll definitely be returning later in the year for another visit!

Adventure Aquarium is open 365 days a year from 9am-5pm. General admission is $24.95 for adults (and children over 13) and $18.95 for children 2-12. The ticket lines can get pretty long, so I’d suggest buying yours online ahead of time and printing them at home. And if you think you’ll visit more than once, their annual pass would be a great choice and would pay itself off in just two visits!  Be sure to follow Adventure Aquarium on Facebook, Twitter, Pinterest and YouTube.

Adventure Aquarium is generously offering one of my readers a family four-pack of tickets to visit and see all this and more for yourselves! This giveaway will end on February 13, 2014. You can enter to win [HERE].

Emily is a SAHM to 3-year old Magnolia and 13-month old Violet. The family loves spending time outdoors, especially swimming in their pool. Magnolia is showing signs of being the next Picasso or Brandi Carlile, while Violet’s innate talents are still under wraps. When not entertaining her two very active girls, Emily enjoys thrifting, baking and all things DIY.