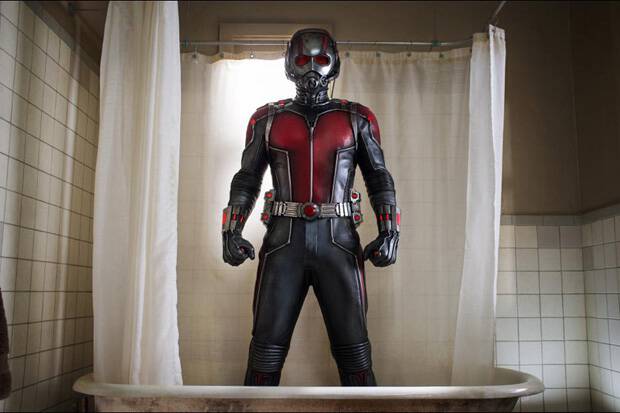 It just wouldn’t be summer unless there were a new Marvel movie to see. This summer, however, we’re getting two! How are we so lucky?! Serving as an antidote (get it?!) to AVENGERS: AGE OF ULTRON’s grittiness is director Peyton Reed’s ANT-MAN. The fun action-comedy is a pivotal peg in the Marvel Cinematic Universe, closing Phase Two and setting the stage for Phase Three. In order for reformed criminal Scott Lang (Paul Rudd) to redeem himself in the eyes of his young daughter Cassie (Abby Ryder Fortson), he must take on the mantle of Ant-Man originated by Dr. Hank Pym (Michael Douglas), who is also enduring struggles of his own with daughter Hope Van Dyne (Evangeline Lilly). This new role will redefine Lang’s sense of self – and also save the world from Dr. Pym’s protégé, the megalomaniac narcissist Darren Cross (Corey Stoll).

At the film’s recent Los Angeles press conference, the cast and crew spilled the beans on all the behind-the-scenes shenanigans. While there were many highlights, we decided to boil it down to seven key fun facts.

7. “Luis” is based on a real person. Michael Pena’s character, Luis, is Lang’s sidekick who serves as a protective father figure to a band of robbers and thieves. He stated, “That’s a real person I’m imitating. His name is Pablo and he’s a criminal. The guy lives in Chicago and is in and out of jail. He’s the kind of guy, when I’m like, ‘What’d you do this weekend?’ ‘I went to jail,’ or he says ‘for a weekend trip.’”

6. If Ant-Man could sit on any of the Avengers’ shoulders a la Jiminy Cricket, it would be… As Rudd took a moment to think about his answer, Lilly came in with the save, suggesting, “He should help the Hulk calm down when he’s big.” “That’s kind of what I was thinking,” Rudd followed up. 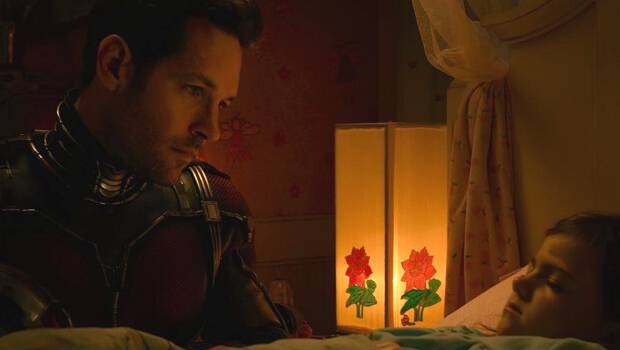 5. Fatherhood is the prevailing theme that reverberates throughout ANT-MAN. Many of the relationships deal with the facets of fatherhood. For each of the characters, it means something different: for Pym, it’s not only that he’s a father attempting to repair his broken relationship with his daughter, but also that he’s fathered a scientific creation that could be weaponized. For Cross, it’s eclipsing his father figure/ mentor Pym. Stoll stated, “That was totally central because [the filmmakers] are playing with motivations. Darren’s after the glory of the scientific discovery, the money, the fame and the power. But in the end, comes down to the small little boy inside that just wants his father’s approval.” For Lang, it’s doing whatever it takes to get back on solid footing for his young daughter. Rudd said, “You can have a movie that has amazing effects, brilliant visuals and a lot of action and humor, whenever you see something you can connect to that’s emotionally resonant, it stays with you in a different way, That’s the key to any movie.” Producer Kevin Feige added, “We’ve never had a hero, in the 11 films leading up to this, whose motivations involved a child – a son or daughter. That felt like a reason to do this film now – it was very meaningful for us.” Reed concurred, “It’s this story about these two fathers and their daughters and [how] in various ways they aren’t a part of their daughters’ lives and [how] they have to repair those relationships. I liked the intimacy of that thematic of the movie.”

4. Pym’s portrait may or may not be hanging in Michael Douglas’ new home. Reed’s film is filled with all kinds of comedy, not just in the dialogue, but a few visual gags as well. One such bit involves a long-retired Pym returning to his company’s lobby and being stopped by security. He points to a giant painting of himself on the wall as his I.D. When I asked him if it now hangs above his fireplace mantle at home, he teased, “I do not have any space – so I bought a new house.” 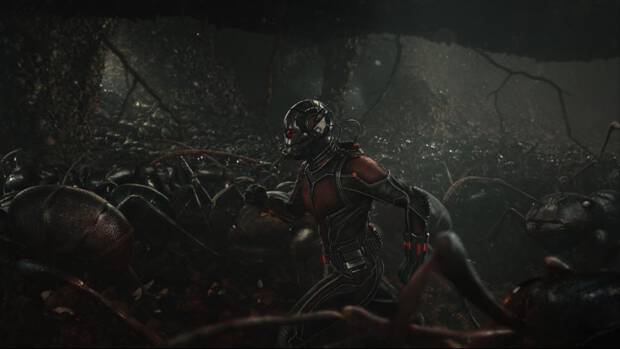 3. The look and sound of ANT-MAN isn’t like anything you’ve seen before. A little less than a third of the film takes place on a microscopic level, which meant going for a very specific look, feel and sound to the shrinking sequences. Reed explained, “I went back and watched all the shrinking movies – INCREDIBLE SHRINKING MAN, INCREDIBLE SHRINKING WOMAN, HONEY I SHRUNK THE KIDS, INNERSPACE. We were making the definitive shrinking movie of 2015 and the drum I kept banging was ‘It’s gotta look photo-realistic.’ What does the world look and sound like when you’re down there? When you see dust particle, how does the light play? It’s gotta look real. That applied to the ants too. One of the challenges was creating ants that looked photo-real, but also giving them some characters. Particularly in the case of Antony, the idea [was] we were gonna create some kind of Roy Rogers-Trigger or Lone Ranger-Silver relationship [with] Ant-Man, because in the comics, that’s one of the iconic images of him flying around on an ant. I wanted to embrace that.” As far as the sound of the micro-world, Reed added, “We had to create an ant language – particularly in that bond between Antony and Scott Lang. The geniuses at Skywalker sound came up with a language.”

2. Evangeline Lilly plays a strong female figurehead without a costume. It’s not just the men who get to be forceful superheroes in the film. Lilly’s character, Hope Van Dyne, also gets to step into the spotlight and shine as a super-genius – without donning any spandex. She stated, “She is a really capable, powerful force to be reckoned with and she doesn’t have a superpower. My super suit was my power suit that I would go to work in and be a high-level scientist – the chair of the board of a very powerful corporation. That’s a fantastic example for young women. When I pick a role, what I aspire to is that somebody’s parent will come up to me after the film and say, ‘my daughter idolized that character.’ That’s what we aim for – especially in this brand.”

1. When ANT-MAN opens, give or take two days, it will be 20 years since CLUELESS opened. Many of us discovered Rudd’s adorableness when director Amy Heckerling’s cinematic reinterpretation of Jane Austen’s literary classic Emma hit theaters on July 19, 1995. Twenty years later, he’s headlining a superhero flick. He said, “I have gratitude and have been so appreciative that I’ve been able to continue to work doing something that I love – not only doing something that I love, but working on movies that I’ve loved. I always try and keep that saying ‘I would want to work on things I would want to see.’ For a large part of my career – the vast majority – that’s been true.” Lilly jumped in, questioning “Who didn’t have a crush on Paul Rudd in CLUELESS – can I just ask that?!” Reed answered, “How dreamy was he in that movie?!” She countered, “He was so dreamy!” Pena responded, “I mean, I’m not gonna lie.” Rudd kidded, “I know! I fell in love with me in that movie. It’s unbelievable, isn’t it?”

Born and raised in Northern California, Courtney has had a love of Hollywood ever since seeing her first film in theaters at age 6 (E.T. THE EXTRA TERRESTRIAL). In 8th grade she was voted most likely to work with the Hollywood elite, and was the only girl in her high school to have a subscription to Entertainment Weekly. Majoring in film at BIOLA University taught her more about the movie making craft and film theory. She also possesses a wealth of useless knowledge of celebrities’ careers and personal lives, which she put to good use during tryouts for the VH1 game show THE WORLD SERIES OF POP CULTURE. Courtney now resides in Southern California with her screenwriter husband and perfect little dachshund.