I was provided with a 2014 Mistubishi Outlander Sport to test drive to facilitate this review. The opinions in this post are 100% mine.  You can read my full disclosure policy here. 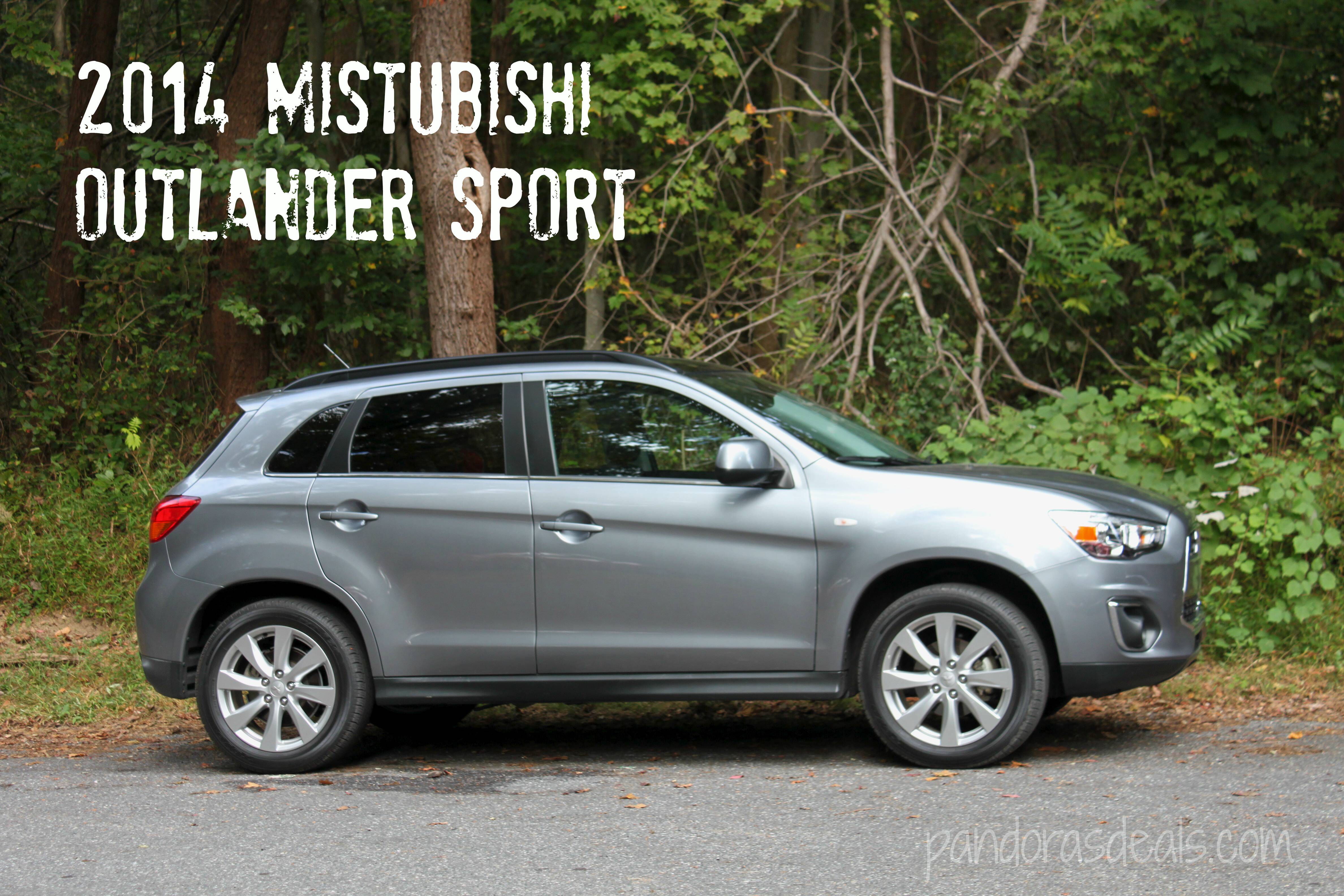 My sister’s first car was a cute little Mitsubishi Mirage and I have such good memories in that car.  So I’ve always had a bit of a soft spot for Mitsubishis and was excited to test drive this stylish 2014 Mitsubishi Outlander Sport.  I have a family of 4 including two kids that are still in booster seats.  While I have to be honest and say I wasn’t completely in love with this car for my family, I definitely appreciated a lot of the features and think it would make a great car for a different demographic.  Let me tell you more about the car and what I liked most. 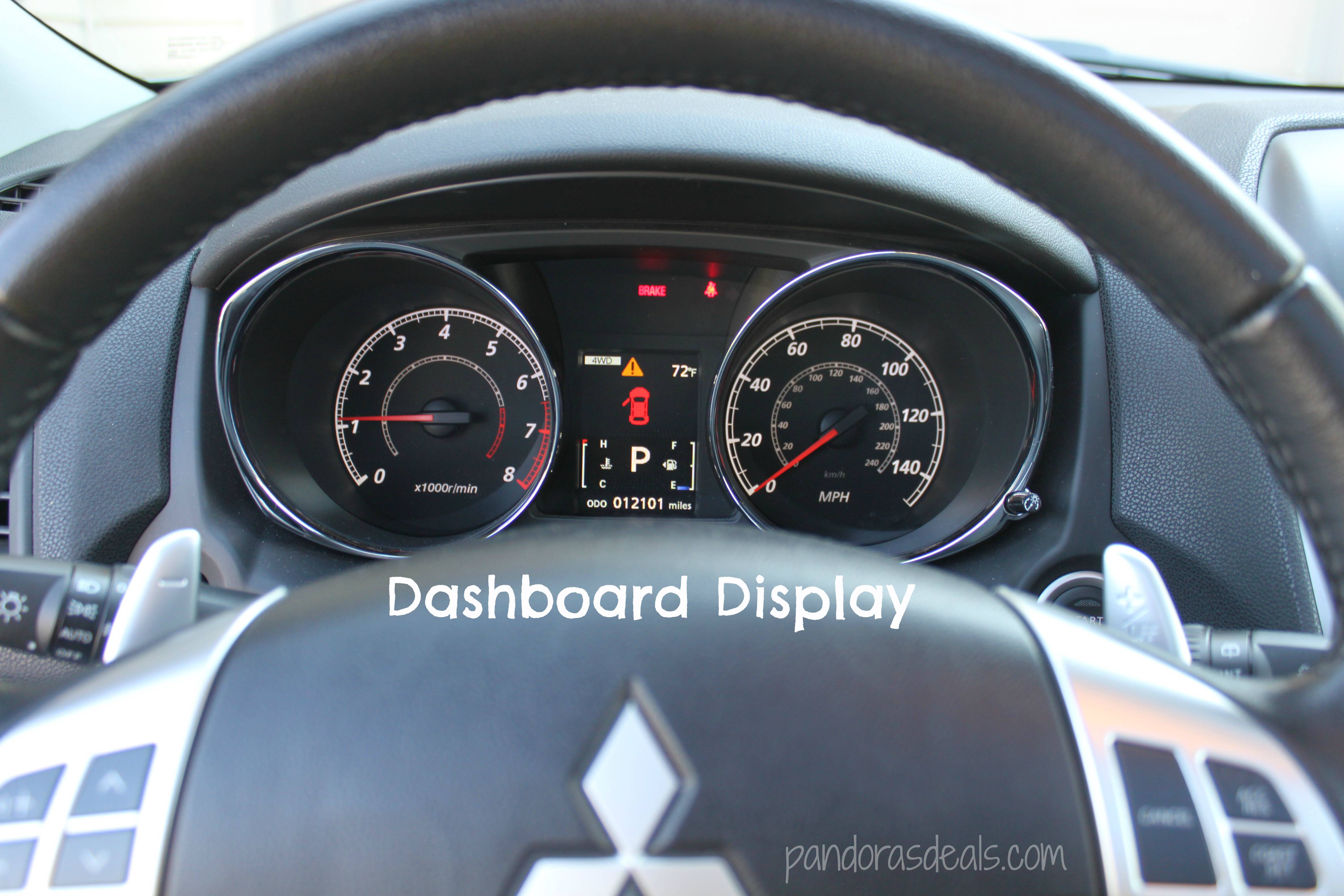 The dashboard display is loaded with info.  I actually had to take a minute or two to look at this and understand all the indicators but once I did it was really easy to read.  The RPMs are on the dial on the left.  In the middle area you get the gear your in, the temperature, engine temp, and gas gauge.  You can’t see it here because I was in park when I took this pic but while you’re driving it tells you how many miles you have until you’ll need a fill-up and what your current gas mileage is.  Good info to have.  Of course the gauge on the right is speedometer.

Turn the car on and off with the push of a button.  I really like not having to drag keys out to get going. As long as you have the key fob nearby you can start the car and turn if off with one push.  While I like the feature I generally felt like it was hard to find what I needed in this car.  Once I found it I knew where to look but I just felt that overall the placement of controls was not intuitive.  Look at the picture on the left.  Sitting in the driver’s seat you can barely see the Start/Stop button.  Seems like it should be more apparent.

Keyless entry lets makes for easy access when your hands are full of grocery bags. This is such a handy feature when you’ve got kids and don’t want to be digging your keys out while you’re holding a little hand to keep them out of the parking lot.  Keep the key fob in your pocket or purse and you can open the door with the push of the button.

Three cheers for heated seats!  I didn’t actually test them out because it was ridiculously hot during my test drive but I absolutely love them in the wintertime. I definitely want heated seats in my next car!  I have to point out again, though, that when you’re sitting in the driver or passenger seat it’s very difficult to even see this little button. It’s kind of hidden and I personally would like it more visible without having to hunt for it.

I really like all the controls on the steering wheel.  I thought this was well laid out and easy to use.  On the left you have the music controls which I used all the time so I didn’t have to fumble with the touchscreen.  On the right you’ll see the cruise control.  And down on the left side you’ll see the controls for your phone if you connect it via Bluetooth. That’s a great feature that lets you keep your hands on the wheel as much as possible.  I found these well-labeled and really easy to use.

Here are the 3 climate control dials.  And I give these mixed reviews. They’re pretty easy to read and understand what they do. I didn’t have trouble with that.  There were two things that kept tripping me up about these knobs.  First, see the red line on the perimeter of the knobs? That’s the ‘set’ line.  Wherever you line that up, that’s where you’ve left your settings.  But then do you see the silver indentations at four other places along the perimeter of the knobs?  Why are they there?  I guess it’s aesthetic but I found myself really having to find the right line to get my settings the way I wanted them, which took my eyes off the road more than I’d like.  I also don’t really like that the ‘Auto’ setting is just past the ‘Off’ setting.  Typically you turn a dial all the way to the left to shut it off. But on this car you turn it just shy of the left-most position.  I’d think that I’d turned the air off and actually I had turned it to Auto.

The rear camera is a must in my neighborhood.  There are kids everywhere around here!  So I really like the added security of seeing directly behind me while I’m backing up.  On this particular day you can see I was reminded to not back over my trash cans!  This camera pops up any time you put the car in reverse and this is one of my favorite features on the car.

The touchscreen is a great command center.  So many of the things you want to control are right here.  The left and middle pictures show you some of the music option. I found it really easy to program my favorite stations and switch back and forth from media type.  On the right you get a glimpse of the navigation system. This was really self-explanatory which is a bonus for me. I like it when everything just makes sense and I don’t have to read up on how to use something. That doesn’t make me lazy, does it?!  I definitely felt that way about the controls on the touchscreen.

The CD player is just slightly tricky.  Once I figured this out it was fine, but again it’s just something that wasn’t intuitive to me.  When you hit the ‘Open’ button the touchscreen moves down as shown above and you insert your CD behind it.  Then you have to hit ‘Open’ again to get it to play.  It’s not really a BIG deal, especially since I suppose I’m the old school person still using a CD instead of my mp3 player (which you can also plug in in this car), but it’s a little awkward.

Illuminated Panoramic Glass Roof: Favorite feature!!  This was my favorite part of this car.  The glass roof is  HUGE and while it doesn’t actually open to the outside, it almost feels like it does, minus the wind of course!  We were out and about on a pretty fall day and it was beautiful to look up and see the trees.  Can you see the reflection of the little LED lights in the glass?  At nighttime these are so much fun to turn on in the dark!

The interior is stylish!  I really like the look of the car even if I ran into a couple of bumps with the placement of certain features.  There are some extra touches like the leather gear shift that makes it special.

Love these dual cup holders in the back seat!  Here’s the back seat, complete with both of my kids’ boosters in it.  This car seats 5 but I think it’s a tight squeeze if you’ve got any kids in any type of car seat.  I love the arm rest that comes down to reveal two cup holders!  Finally! A good place for my kids to put their drinks.

Booster seats were a challenge for us in this car.  This was probably my #1 issue with this car, and I need to highlight the fact that this is NOT going to be an issue for everyone.  You saw we had two booster seats in the back. If you don’t have kids that are young enough to be in car seats you can skip this part. If they’re in a booster seat, or will be, you might want to read it. At least for our booster seats, the seat belt latch is not a far enough distance away from the other side to really even clear the edge of the seat. Can you see how the latch is kind of hiding behind the seat?  My kids are both able to buckle themselves in their seats. My daughter is 8 years old and has been in a booster seat for over 3 years. She always belts herself in but in this car, I had to slide her seat as close to the door as I could, buckle her, and then slide her back to center. Same with my son’s seat, the one you see above.  It was a bit of a pain, to be honest, to have to mess around so much to get them in the car every time we came and went.  If you have older kids, this is going to be a total non-issue.

The trunk is really spacious.  We took the car out to get our pumpkins this year, among other trips that involved a lot more grocery bags, and had no trouble fitting tons of stuff in the trunk.  It’s nice a wide and I like that it sort of drops down a bit so nothing comes rolling out when you open the hatch.

What about the performance?  Well…. It was pretty good.  This car has a Continuously Variable Transmission (CVT) and it’s the first car with a CVT that I’ve ever driven. So it took me some getting used to.  You definitely have to press a little harder on the gas to get to the power.  I sort of expected a little more pick up from a new car but I think that has something to do with me not being used to driving a car that doesn’t shift gears.  In some ways I liked the CVT.  You never get thrown back as the gears shift and it’s a smooth ride.  It just sounded like it was working really hard to accelerate.

The Mistubishi Outlander Sport is a really stylish looking car.  I love the way it looks and had a lot of fun driving it. I got lots of looks from all the moms and dads at my son’s preschool!  Everyone was eyeing up the fancy new car.  It’s got a lot of curb appeal. There were some features that I loved and some that I wasn’t as thrilled about but I think these are all a matter of personal preference and the needs of a family like mine with two little kids.  If you’ve got the Outlander Sport on your short list for your next car I absolutely think it’s worth a test drive to check it out for yourself.

The 2014 Mitsubishi Outlander Sport starts at $23,695 and goes up from there depending on options added.