If you’re local to the New Jersey or maybe you vacation there at the beach in the summer you may have heard of this fun attraction, Sahara Sams Oasis Indoor and Outdoor Water Park.  It’s located in New Berlin, New Jersey, which is in the southern part of the state, not too terribly far from Philadelphia.  My family had the chance to visit this past weekend and I’m glad to be able to share my review with you!

I have to start by telling you that we went on a Saturday which was a very, very (VERY) poor choice.  It was extremely crowded which made it hard to enjoy the park.  I have a great blogger friend that I know and trust who went just a few days prior to me on a weekday and her family had a great time.  So if you get nothing else out of my review, get this: don’t go on a weekend!  I really wish we had gone on a weekday. 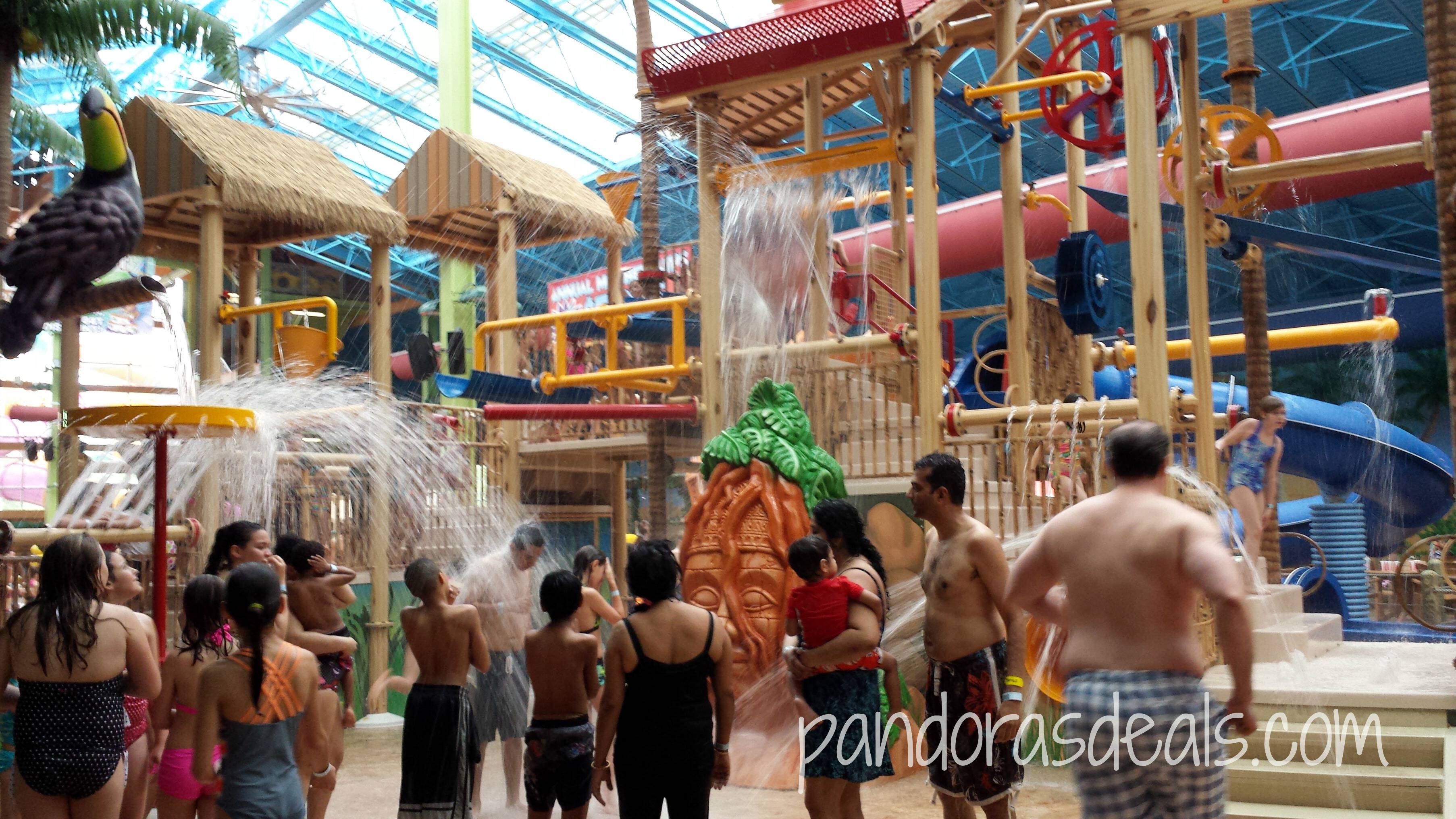 The best thing about Sahara Sam’s is that it’s inside!  This is really cool because it means it’s open year-round.  I don’t know about you but I often struggle keeping the family entertained during the colder months.  It’s warm inside, like you’d expect an indoor pool to be, and would be such a nice break from the winter cold.  Definitely love that! This summer they’ll be opening up some outdoor attractions, too, that look great!

There are some great attractions at the park.  My family went on the CongoBongo lazy river ride probably four times.  There were some waterfalls along the way  and little sprays of water to dodge (or get in!).  We all hung onto each other’s rafts and either my husband or I held our son. He’s 4 and was a little too small to ride alone, but my 7yo. daughter went solo and did great.  You have to be paying attention at the end of the ride and get yourself toward the exit or you might just end up going around again.  Maybe that’s not a bad thing. It is a fun ride!

My daughter enjoyed the lily pads that you make your way across with the help of a cargo net that hangs above.  It was pretty challenging and she had fun making it to the finish line.

There’s an area designed just for very small kids, but it was so crowded we couldn’t get near it and my kids aren’t that little anyway.  Still, a nice option if you have children that are very young.  My family did enjoy the Tim-Buk-Tu Adventure Playland with spilling water and some other slides and water features.  Lots of things to do in there!

So as you can see there are definitely some fun things to do at Sahara Sam’s.  Having said that, my #1 job here is to be honest with you and this review would be incomplete if I left it at that.  There were a few things about Sahara Sam’s that left my jaw on the floor.  The most shocking thing that I still cannot get over is that as soon as you walk in there’s a giant bar in the front of the building.  I can’t believe there would be a bar serving alcohol in a family-friendly water park.  This is what it says about Sam’s Lounge on their website: “Maybe you came to watch the game, forget about work, or enjoy good company, whatever the reason is we are toasting to you: “To the best parents in the world!””  WHAHATT?  Since when are the best parents in the world hanging out at the bar while their kids are playing in the water?  Danger, danger.  Very bad idea.  Don’t get me wrong, I’m not a stick in the mud that doesn’t enjoy a drink once in a while.  But I think we can assume no one is going to Sahara Sam’s *without* kids, so this is pretty much a green light to drink while your kids are in water and you’ll be driving them home.  I still can’t get over it.  Why is this necessary?  Why, Sahara Sam’s? For the love of family fun, WHY??

Okay, if you can get past the bar (which, incidentally you have to in order to get near any of the water attractions), I want to say again and again and again and again, do NOT go on a weekend.  It was so crowded.  Now, obviously that meant that we had to wait in some lines, but that wasn’t the worst part.  I think too many parents were at the bar and not watching their kids.  Despite the fact that Sahara Sam’s does provide life vests free of charge (thumbs up on that!), many kids who needed them weren’t using them.  While my daughter waited in line to cross the lily pads, I watched the lifeguard jump in and save no less than 3 kids who fell off into the water and couldn’t swim.  So kudos to the lifeguard for doing a stellar job and really paying attention.  The parents of these kids?  No kudos for you.

Along the same lines we saw kids spitting at each other in the river ride (ew) and one woman actually put her child who had to be no more than 18 months old down a twisty water slide by himself. The lifeguard caught him at the bottom before he went under the pool of water.  There was a lot of ‘what the heck is going on here’ looks being passed back and forth between my husband and I while we were there.

We stayed about 2 hours and then decided we were going to leave and go back to the beach for some peace.  Other than the bar situation, which I will just never understand, I honestly think if you went on a weekday instead of a weekend like we did you would probably  have a great time and really enjoy it.  It’s a neat set up, I like the lockers for a flat $5, there are nice changing facilities, there’s a cool arcade on your way out, and the rides are fun and can be enjoyed year round.  But if you go on a weekend, don’t say I didn’t warn you!

You can learn more about Sahara Sam’s Oasis by following on Facebook and Twitter.  You can enter to win tickets here, too! (ends 5/31/13)

I was provided with complimentary tickets in exchange sharing this review with my readers.  You can read my full disclosure policy here.