I was provided with a complimentary copy of My Liittle Pony Equestria Girls to facilitate this review.  The opinions in this post are 100% mine.  You can read my full disclosure policy here. 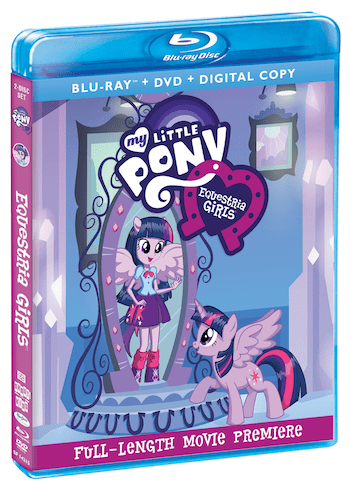 My Little Pony Equestria Girls comes out on Blu Ray and DVD on August 6. If your kids are MLP fans, they’re going to love this one.  This is a full-length movie that was actually shown in theaters and now you can bring it home.  It’s available for pre-order on Amazon right now.  We were sent a copy to review and it was an instant favorite with my kids. My daughter is a MLP fanatic to begin with!

Check out the trailer!

You can really get a good feel for the movie through that trailer. It’s peppy with some of the themes we’re used to seeing in MLP shows: friendship, not giving up, and overcoming adversity.

What is My Little Pony Equestria Girls about?

My Little Pony Equestria Girls is a brand new full-length feature introducing a whole new dimension into the My Little Pony world. When a crown is stolen from the Crystal Empire, Twilight Sparkle pursues the thief into an alternate world where she transforms into a teenage girl who must survive her biggest challenge yet…high school. With help from her new friends who remind her of Ponyville’s Applejack, Rarity, Rainbow Dash, Pinkie Pie and Fluttershy, she embarks upon a quest to find the crown and change the destiny of these two parallel worlds.

What did we think of the movie?

Like I said, it was an instant hit with my kids.  I kinda had to put a limit on watching it so it wasn’t overkill in the house.  My daughter has a pretty sizable collection of Ponies and anything Pony is a hit with her.  We have another MLP movie that I’d call ‘old-school’, and this one is MUCH better!  It’s colorful with catchy songs and a lot of great messages about friendship, believing in yourself, and not giving up.  Plus it was just really unique! Ponies in high school…how cool!

My Little Pony Equestria Girls comes out on Blu Ray and DVD on August 6 and you can pre-order on Amazon and be all set for the release!