I was provided with a complimentary copy of JFK: A New World Order to facilitate this review.  The opinions in this post are 100% mine.  You can read my full disclosure policy here. 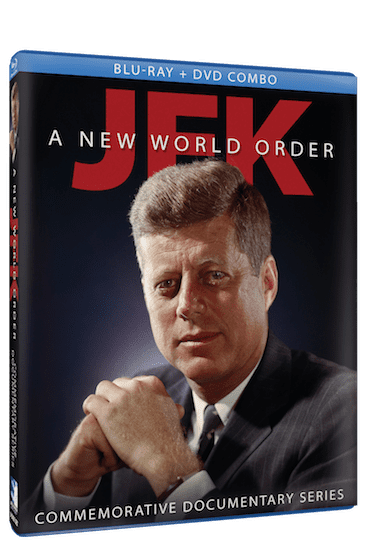 To commemorate the 50th anniversary of the death of John Kennedy, this documentary series, JFK: A New World Order was released this summer.  I’ve watched it over the course of a few weeks, sometimes with my Mom who can tell you exactly where she was when she heard the news that JFK had been shot, and sometimes with my husband who is a history buff.  I, on the other hand, never loved history as a student and didn’t have great teachers so I didn’t learn much.  Now that I’m older I really wish I had so this was an interesting series for me to check out.

Insightful and comprehensive, this documentary series is an in-depth chronicle of John F. Kennedy’s life from barely surviving birth to the years leading up to his decision to enter politics to the tragic events in Dallas on November 22, 1963 to the legacy he created.  Journey through the pivotal moments that created one of America s most beloved, influential and controversial figures through interviews with historians and archival footage that commemorate the man and the myth that is John F. Kennedy.

There’s a lot of material on these DVDs. Here’s what’s included in the set:

Program 1: Early Years
John F. Kennedy s life through his election as the 35th President of the United States.

Program 2: For All to See
The 1960 Presidential election and the many obstacles, including familial and religious, that Kennedy needed to overcome to win the United States Presidency.

Program 4: Doomsday Averted
The Bay of Pigs and The Cuban Missile Crisis, to his proudest achievements, the Limited Nuclear Test Ban Treaty.

Program 5: A Wall of Words
The origins of Soviet-American tensions in the divided city of Berlin from the final days of World War II up through the time of John F. Kennedy s Presidency.

Program 6: War Within & Without Part 1
Civil Rights, from his record as a senator up though the transformation near the end of his life that would help inspire the Civil Rights Act of 1964.

Program 7: War Within & Without Part 2
The events in Southeast Asia that eventually led to America s war in Vietnam.

Program 8: Camelot And Beyond
His health and private life, marriage and family, the myth of Camelot, and finally, his assassination and legacy.

As a person that’s not extremely well-versed in history and a person that was not alive during the time of JFK I watched without bias. I didn’t have a strong opinion of him one way or the other when I started the DVDs.  While I definitely learned a lot and found them thorough and educational, I have to say I don’t think they painted JFK in the best light. Maybe it was just an honest look at his life and presidency, or maybe it was slanted. It’s so hard to tell when you’re dealing with politics and political figures.

I think JFK: A New World Order is a great series for anyone who wants to learn more about that period in American history. I definitely learned a lot and I really liked that it was broken into small chunks so we could watch a little at a time.  You can order JFK: A New World Order on Amazon. Might make a great gift for your favorite history buff, too!

I’m giving away a copy of JFK: A New World Order on DVD as part of my 2013 Holiday Gift Guide! This giveaway will run through December 2, 2013.  You can enter to win [HERE] when the giveaway is live.