I can’t tell you how excited I am for Disney’s Planes to come out so you can all go see it.  My kids are counting down to August 9 and so am I. They’re going to love it! I got to see the movie while I was in Los Angeles this month for the Monsters University Premiere and totally fell in love with a whole new group of Disney characters.  I got to see all kinds of behind-the-scenes peeks about how this movie was made and some of the cool Planes gear we’ll see in stores. Over the next few weeks I’m going to be sharing all of it with you!  Let me know if you have any questions and I’ll do my best to tell you more based on what I learned.  The one thing I walked away with was this feeling that it’s just so amazing how when you watch the movie on the big screen it looks so seamless, so perfect and just as it was meant to be.  But the amount of work that goes into a film like this is astounding!  The talent…whew!  Just incredible. 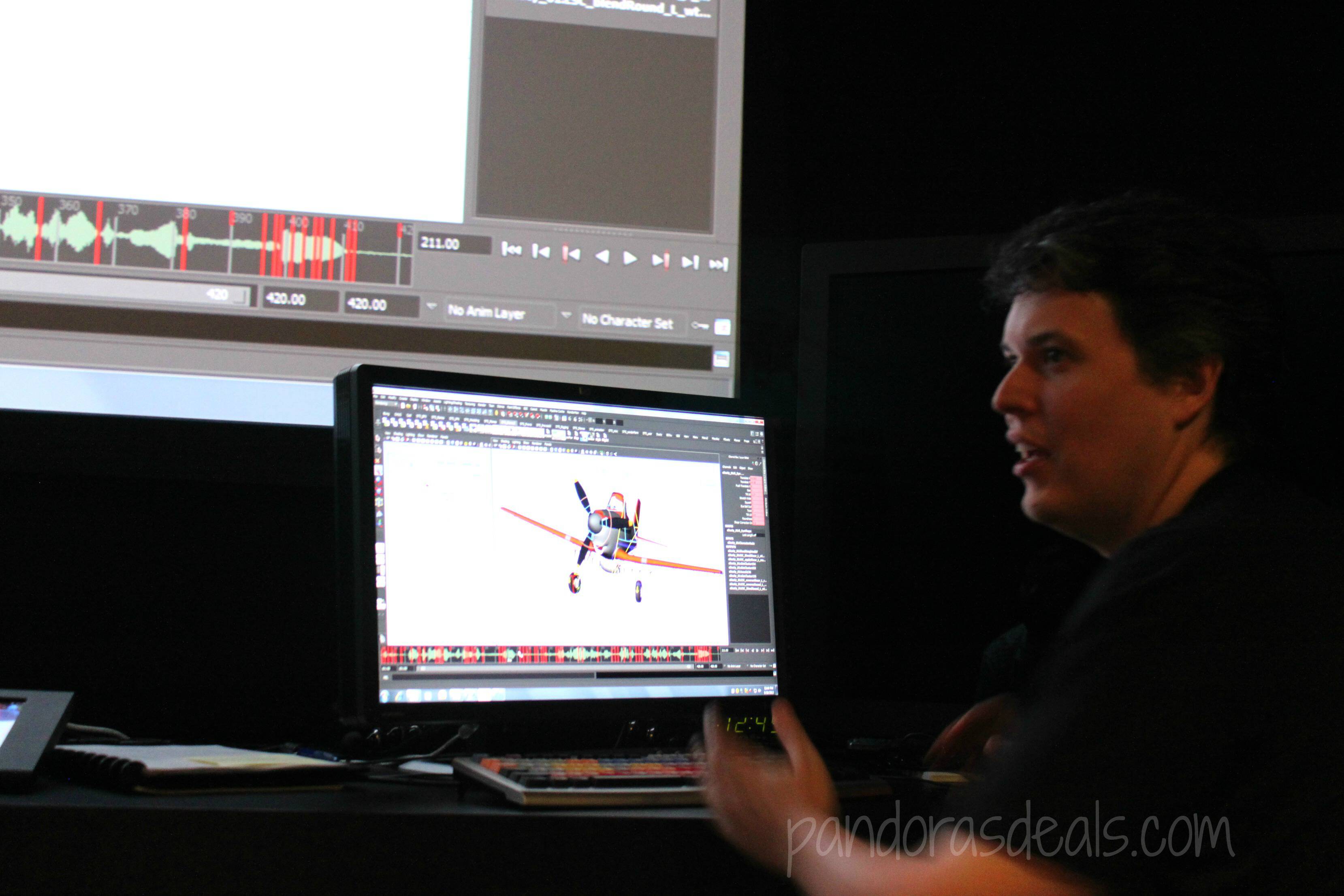 One of the first things I got to learn about the making of Planes was how the movie was animated.  This is such a cool process!  Ethan Hurd, Assistant Animation Director (who is brilliant and been doing computer animation for 15-20 years) taught us about the process of animating a film and it is a looooooong one, but so neat, especially if you’re a computer person.  The first things an animator receives are the storyboard pictures. These are just black and white drawings (more on this in a future post!) of the characters so there’s a lot of work to be done to bring them to life.  Once the animator has the storyboards in hand, he or she talks to the Director to find out what’s going on in the character’s head.  They might even act it out so the animator can really get a feel for what’s happening in each scene. 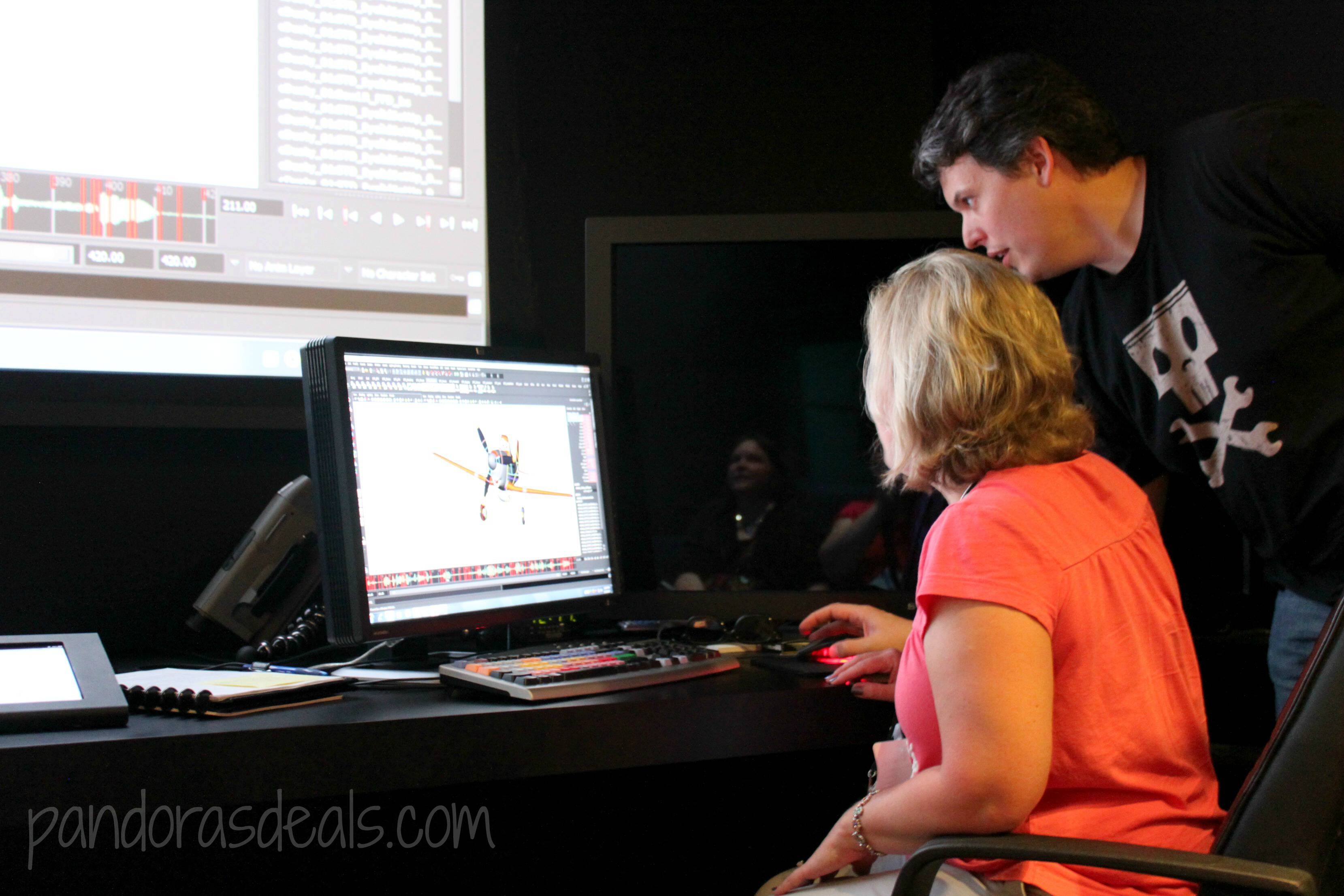 Next up: Create a rough version. This is like posing a toy inside of a computer and they use Maya 3D Animation Software to do it.  Instead of using your hands you use a mouse! Ethan showed us pictures of Dusty, the main character in Planes and we got to see each stage of this process. The coolest part comes last, when they fill in all the details: the lips, eyes, foot movements and little things like that. Have you ever watched the eyes on an animated character?  It’s really something how they use the eyes to convey so many different emotions.  And the eyelids, too!   We each got a chance to try it.  Ethan had to help me figure out what I was doing but I had so much fun making Dusty move.  It’s a lot of clicking and dragging the mouse and once you get the hang of it it’s not too hard…not that I have a future in animation or anything!

Finally when all the animation is done, it gets handed off to the next person where they add light, shadows, and texture to the film.  It’s a lot more involved than you might have thought, right?!  I had no idea all that goes into a movie like Planes.  This is my friend Sherry from Family, Love and Other Stuff.  You can see what she thought of the process here!

A couple of things I found interesting: Ethan didn’t animate the movie in chronological order.  There’s a lot of skipping around that goes on to get it all done and put together in the end.  I also asked how often you have to pose Dusty to get a scene done. I mean, he’s constantly moving so do you have to pose every single little movement?  Well, not quite…but almost!  Ethan explained that there are 24 frames in a second, and you need to frame him every 2 to 4 seconds. The computer will fill in the gaps.  So every 2 to 4 seconds throughout the entire movie, and remember this has to be done for EACH character, an animator has posed these planes! Now that’s pretty incredible!  Check out that trailer above and think about it through the eyes of an animator. Just imagine all the work that went into that little clip of the movie!

I can’t wait to tell you more about what we learned about the making of Planes. Be sure to stay tuned! In the meantime, you can catch a another sneak peek of the movie here, and see the entire line up of stars that are part of the voice cast, too!  Check out the Disney Planes website for more Planes fun, and keep up with all the latest Planes news by following on Facebook and Twitter!

Want to know how they animated #DisneyPlanes? Check out this behind-the-scenes look! http://t.co/WbAwPcDLCS #DisneyPlanesEvent #animation